Buildings and a Sniff of an Idea

My head is now clear and so all that remains of my general illness is the Niagara like running nose and the chesty cough. I can put up with both of these (although the cough is quite wearing) but the 'cotton wool' head  feeling tends to knock the stuffing out of me and so it was with some relief that it finally disappeared to coincide with the sun finally appeared after the monsoon of a downpour last night. SWMBO and I decided that some fresh air was in order to reinvigorate me further and so we hit our local Saturday boot sale. To be honest, I was quite surprised that it was on given the recent downpour and I was not alone in this as the number of sellers was fairly modest compared to usual. I picked up a couple of bargains though, including two of the Greek ceramic buildings from the same range as my existing collection for a pound and also a copy of the Lord of the Rings version of the popular boardgame Risk for one pound and fifty pence. 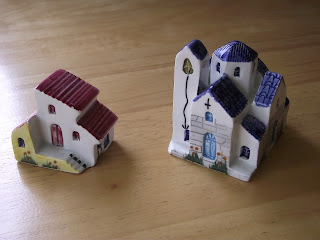 "One ring to bring them in, and in the man cave bind them!"

I have absolutely no intention of playing this game as is but will certainly look to use the figures at some point as well as the map board. The figures are pretty good and are made from hard plastic and so would serve for the forces of good and evil in a cheap and cheerful way. The eagles are very nice models although I reckon they could easily have the bases removed so they could be mounted on flying bases. The figures could easily be converted (as could the vast supply of 18th century figures I own from that particular version of the game) where required and for terrain there are some suitably useful aquatic fortress or tower models of the type used in aquariums that would make some fantastic looking strongholds. I even have a Battle Cry/Memoir 44 set of fantasy rules that could be pressed into service if needs be and so the potential for some Middle Earth action is certainly there. In the meantime though, I will see about acquiring another couple of sets to build the numbers up and then see what develops. This will be a slow burner though....;-)

A copy of LOTR RISK for £1.50 eh? A real bargain ... with lots of potential for a campaign battle game for almost any era.

It is really weird - there I was, wandering about at the boot sale with thoughts of your recent game using the LOTR board when lo and behold, a set appeared in front of me!

As you rightly say, lots of potential but the figures will be a real slow burner - too many other things to do beforehand.

I'll be interested to see your LotR game version. I tried one out recently and it was fun.

The rules are called 'Te Wapen' and are available free via the Yahoo group of the same name. They work pretty well and are suitably 'heroic' in concept.