Once more unto the breach, dear friends, once more.... 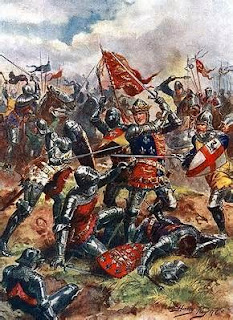 Tomorrow sees me going back to work for the first time since September 21 last year. The DIY list has been blasted into a million pieces, the project list has grown and shrunk more times than the UK economy; my library at home is now a lean, mean repository of selected tomes as I have been busily financing my hobby from my own resources, so to speak and I have even managed to get a lot of stuff painted (well a lot by my standards anyway!) during my enforced absence from the land of gainful employment. However, all good/bad things (delete as applicable) come to an end and so the inevitable reality of the workplace looms large once again. I am truly delighted to be doing so - especially as the job I am embarking upon represents a change of career and a new direction and challenge. It will be a grand adventure and so I wanted to write something suitably witty and original but instead decided to let the bard himself do the talking as he can describe the situation and how I am feeling far better than through the medium of my own humble efforts!


SCENE I. France. Before Harfleur.

KING HENRY V
Once more unto the breach, dear friends, once more;Or close the wall up with our English dead.In peace there's nothing so becomes a manAs modest stillness and humility:But when the blast of war blows in our ears,Then imitate the action of the tiger;Stiffen the sinews, summon up the blood,Disguise fair nature with hard-favour'd rage;Then lend the eye a terrible aspect;Let pry through the portage of the headLike the brass cannon; let the brow o'erwhelm itAs fearfully as doth a galled rockO'erhang and jutty his confounded base,Swill'd with the wild and wasteful ocean.Now set the teeth and stretch the nostril wide,Hold hard the breath and bend up every spiritTo his full height. On, on, you noblest English.Whose blood is fet from fathers of war-proof!Fathers that, like so many Alexanders,Have in these parts from morn till even foughtAnd sheathed their swords for lack of argument:Dishonour not your mothers; now attestThat those whom you call'd fathers did beget you.Be copy now to men of grosser blood,And teach them how to war. And you, good yeoman,Whose limbs were made in England, show us hereThe mettle of your pasture; let us swearThat you are worth your breeding; which I doubt not;For there is none of you so mean and base,That hath not noble lustre in your eyes.I see you stand like greyhounds in the slips,Straining upon the start. The game's afoot:Follow your spirit, and upon this chargeCry 'God for Harry, England, and Saint George!'

Over the top? Probably, even by my standards - but then I have never been one for the subtle or understated turn of phrase....;-)
Posted by David Crook at 19:37

Well done for getting back to work..and can a speech like "once more...." ever be over the top?..:-D

Cheers Lee - hopefully I will catch up with you and the rejects at Broadside in a few weeks.

Many thanks and definitely not - in that order!

Good luck on the 'morrow - just would advise not to enter the office on a War Horse bellowing your war cry...... ;-)

The office is in a basement so the war horse would have to be parked upstairs anywway....;-)

DC (stiffening his sinews and summoning up the blood....)

All the best in your new career - enjoy.

It took longer than you had hoped it would ... but it is the opening you wanted ... and deserve.

Good luck starting the new job, I hope it all works out for you :-).

I don't suppose you've finished the write up for the Battle of Kara Deniz have you? Only it was just getting interesting...

Best wishes for the new job :)

It's terrible how we need to work to afford lead to paint but it doesn't leave us time to paint it all.

Many thanks old chap! I am really excited about the prospect although obviously the hobby will have to fit in around work and the altered domestic schedule!

Many thanks Bob, much appreciated. I am really excited at the prospect and am hoping that it will lead into areas that I have long aspired to.

I hadn't forgotten but I have not had a chance to complete the write up - I was planning to finish it over the course of this weekend so will let you know asap.

We can blame work for the lead and plastic mountains then?

That is very true indeed! Many thanks Tamsin - are you going to Broadside?

Many thanks old chap! I am looking forward to Broadside and meeting up with the rejects en masse - say hi to the angry one for me!

Good luck, enjoy the challenge, and I hope you have some fun at work.

Thanks Mike! I am hoping that that the last two points will figure in due course!