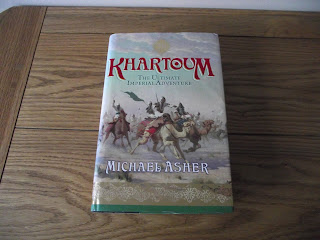 Khartoum - I can almost feel a rush of Kipling based war poetry coming on just looking at the cover!

I picked up the above title for two reasons. Firstly, the author, Michael Asher, has written a first class biography of T.E.Lawrence entitles Lawrence: The Uncrowned King of Arabia which I enjoyed enormously and secondly, because my knowledge of the wars for the Sudan is rather modest.

Khartoum - The Ultimate Imperial Adventure by Michael Asher (ISBN 0-670-87030-7) covers the military campaigns from the massacre of the Hicks Pasha column at Shaykan in 1883 to the final confrontation at Omdurman in 1898. The story of the Gordon Expedition, gunboats on the Nile, Camel regiments, 'Fuzzy Wuzzies' the Mahdi, naval brigades and charging with the 21st Lancers at Omdurman are the quintessential elements of any good Colonial war game and  so I am really looking forward to reading this.

If truth be told I would also like to tackle this using figures at some point but this is some way off. I will go so far though as acquiring a copy of the rules published by Peter Pig - Patrols in the Sudan - as they are pitched at the right level in terms of the amount of material needed - typically 80 figures a side - so it would well within my means to take on.

Science versus Pluck is also worth a look.

I have heard good things about this set so will investigate accordingly.

A brilliant book - I loved reading it !

I have been waiting for a book like this to come along - simply because I really like the writing style of the author.

I just know that something gaming related will come out of it!

You can't go wrong with a good book to kick start a new project - and kick your wallet where it hurts, for that matter.

Looking forward to seeing your Sudan collection, should you give in to temptation.

David, of course you need another project!

Do you want to die from "lack of another project" disease?

You are so right - on both counts!

I hadn't thought of it that way so I suppose for the good of my health I should give in and bow to the inevitable!

I'm with Mosstrooper on this one... a brilliant book... you may get some idea's from my Sudan project page.. but other than the above suggestions my favourite rules at the moment are "A Good Dusting"...

Many thanks for the recommendation - and the useful link to your blog with some great information in it!

It is one of those things I will tackle at some point but I have a lot of ground to cover beforehand!

It's an excellent book!

If they only extended the range to cover plastic Imperial and Egyptians I would be more than tempted!

While my own project is 15mm, if I were to do it again I would seriously consider the Newline Designs 20mm range... best of both worlds.. small enough for big units, big enough to see the beautiful detail... and cheap...