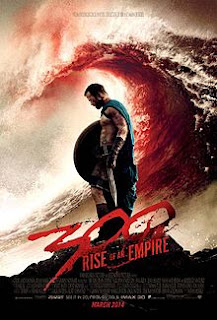 "Give them nothing....but take from them everything....!" - OK, I realise that Leonidas did not serve afloat but the quote was worth a spin in any event....

This is very much a naval themed post - and from both ends of the historical spectrum!

At the time of writing the final part of my 1/2400th WW1 naval order from Stonewall Miniatures is en route from deepest Cornwall and so naturally, my thoughts are heading toward the completion of next phase of the project. After some careful thought I have decided that the models will be used solely for the Grand and High Seas Fleets respectively and so both Fezia and Rusland will remain 'Dreadnoughtless' for the time being - or at least until I can get a meaningful order over to Panzerschiffe in the US for the remaining vessels for these two worthies. A lot of the earlier British and German types  - especially battle cruisers - are missing from the Stonewall range, as are anything usable for the Russians and Turks so this will be addressed via the US company in due course. Once the Stonewall order is here though, I will be looking to turn it around painting-wise in short order which, using my new technique, should be fairly straightforward.

With work being the way it is I will need to plan the painting around weekends so having a plan for this will be a big time saver in order that I make the most efficient use of the hours available.

I have also been thinking about rules and the type of actions I will be looking to game. For the North Sea set up I will be looking at varieties of fleet level actions and so using a set of rules that are both fast in execution and capture the feel of operations at this scale will be obligatory. I have looked at a lot of sets of rules - each very commendable in their own way - but have settled on using the old Avalon Hill Jutland rules as the basis of my North Sea (and further afield) adventures.

These rules have had much extra detail added to them over the years - detail that has stayed true to the original Jim Dunnigan design. The end result is a set of rules that are simple, fast in execution and with sufficient 'feel' to fully capture the experience of commanding squadrons of battleships at sea. They are a very 'old school' set of rules but in my opinion this only adds to the attraction.

The only change I will need to employ is to change the measurements into inches.

This is fairly radical for me but given the number of models I shall be using and the amount of space needed to deploy them in means that the 6ft by 4ft table will need to come out and a cloth used. I am not phased by this as the actual calculations involved are very simple and will equate to roughly 2" to a thousand yards - simply put, 20,000 yards will be 40".

This will be a simple and unfussy solution to a long-standing dilemma I have had in respect of naval rules for the period. Essentially I have settled on the scale of action I want to fight and the rules I want to use - simple really.

The next thing is something that I had not considered but I am hugely excited about. Next year will see the release of 300: Rise of an Empire - by the same team that produced the film 300. Now I know that 300 was a piece of enjoyable hokum but I really liked the concept and imagery and so the news that the naval battle of Artemisium, with possibly a touch of Salamis thrown in for good measure was being made had me a positive whirl of anticipation. Some dubious details (Wikipedia) can be found here - 300: Rise of an Empire

I a really looking forward to this - it will probably be as big a piece of hokum as 300 but I will enjoy it anyway!