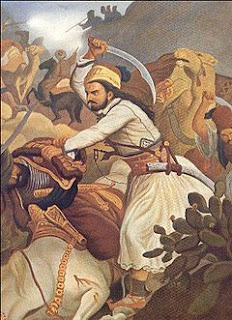 Sometimes you come across a war or campaign that appears to offer little in the way of tactical or strategic interest. Notably absent are any great examples of the art of war; no 'great captain' or crack formation of troops cross the stage of the conflict but for all that, the war or campaign still manages to inspire the gamer in some way or another. Sometimes, the idea of the conflict is more inspiring than the events in actuality - in this case I am talking about the Greek War of Independence.

In a nutshell, the war consisted of gangs of brigands overcoming the bulk of the Turkish occupying forces - usually with a view more to the local situation rather than the 'national' one - and a makeshift 'navy' sailing rings around the far more powerful Turkish fleet. This was then followed by a determined Turkish response on land as the specially requested Egyptian army managed to take back pretty much all of the liberated Greek territory from the assorted rebels. By this time the great powers had taken an interest and the culmination of this was the destruction of the Turkish/Egyptian fleet at Navarino in 1827 which effectively ended the Turkish occupation. 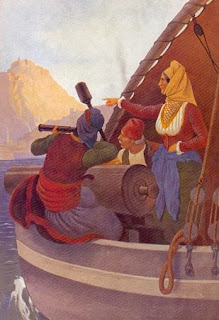 The legendary Greek female admiral - Bouboulina. She was said to have had six children and was so unattractive to look at she had to seduce men at pistol point!

The Greek forces consisted of various bands of brigands - the Klephts or Armatouli - that operated across Greece and were usually more concerned with being the top dogs in their particular location and of getting one over their rivals. The idea of nationalism was very much a foreign import which the Greeks themselves were initially sceptical about. Even the foreign volunteers and adventurers were indifferently welcomed and the theatre of war led to many cases of destitution as the Greeks had little money or death by disease. Byron himself being such a victim.

From such unpromising material though a number of great gaming opportunities can be explored. My opinion is that for the most part this is very much like a Colonial campaign - the North West frontier springs to mind - except with a naval dimension. I like the idea of gaming irregulars against regulars as this always makes for some interesting actions given the differing priorities and objectives of the combatants. I am planning to try a couple of actions once the remaining block armies have been completed just as an experiment but I reckon there is much potential with this war - more so than would first appear from reading about it.

"and was so unattractive to look at she had to seduce men at pistol point!"

What Cad has so sullied the poor lass's reputation!

A very interesting idea for a small-scale wargame campaign with the opportunity to field lots of different forces.

I look forward to further developments with interest.

Bouboulina had an interesting life - she ended up being shot as the result of a feud and she was then made an posthumous admiral in the Russian navy for her exploits during the war against the Turks. She also had a purpose built flagship - the Agamemnon.

She also had a sideline in melting down captured brass guns and using the services of one of the Sultans minters to produce her own coins!

It appeals to me on a number of levels - not least of which is the scale of the operations undertaken but also my liking for the history of the region in any event. I also need to find some use for all those lovely looking ceramic buildings....;-)