Back up in the roof....Part the Second

At last! The revitalised man cave is now officially open for business. The last of the bits and pieces that needed putting away are now safely in deep storage and what is left is now a much more spacious set up then previously. 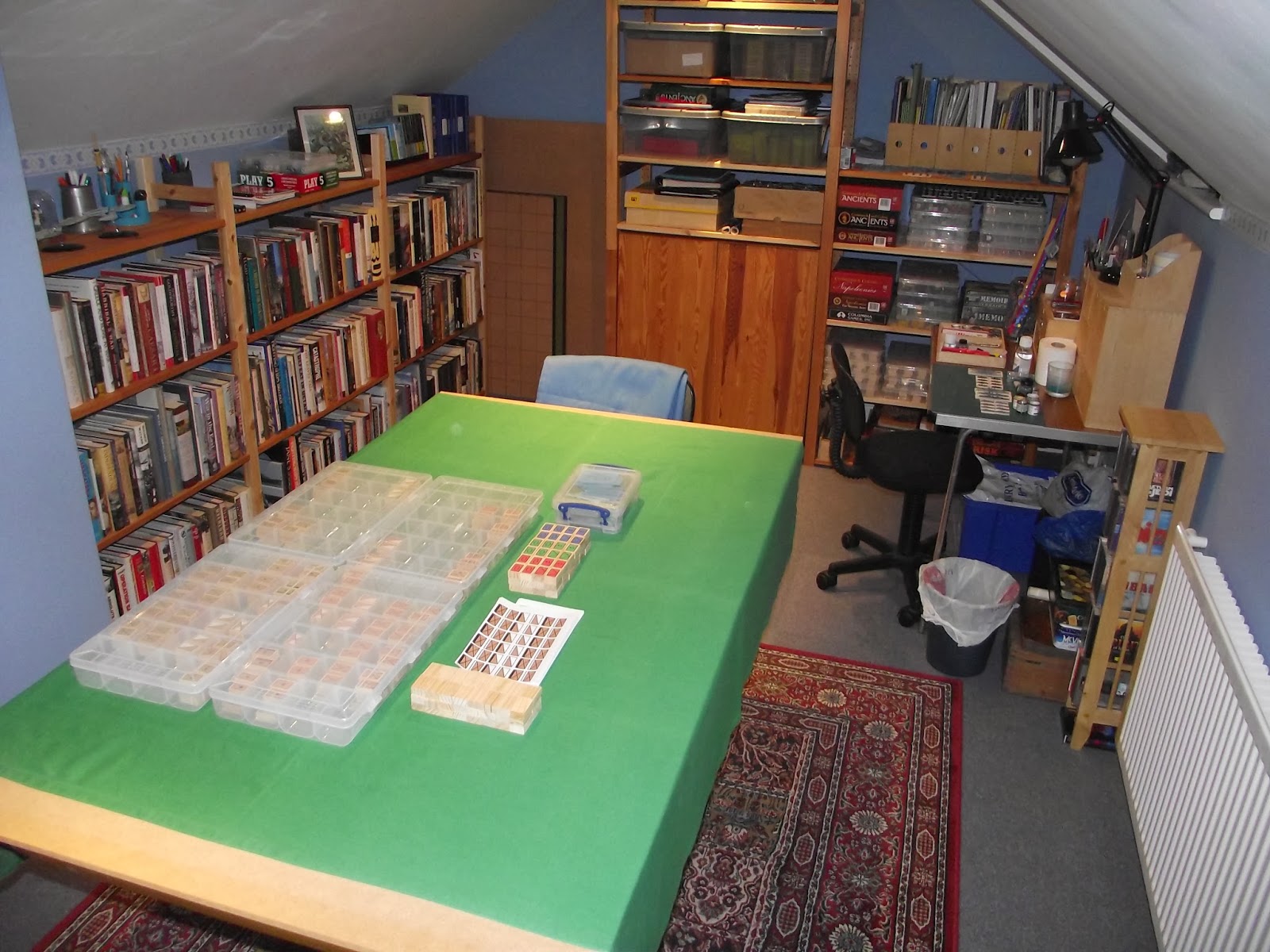 The main part of the library is now along one wall with my folding 6 by 4ft table stored with a pair of 3 by 2ft boards in the top left corner. The table you see in the centre is 5 by 3ft and has plenty of space all around it (you can see this better in the next picture). Note the CD storage rack at the top of the radiator on the right - it is one of a pair and I plan to have a bridging shelf between the two over the radiator for some extra usable surfaces.

The change around took me rather longer than I expected but the end result is definitely worth it. Once I have the radiator bridge in place I can redeploy some of the items dotted around so the space will seem even more, well, spacious. 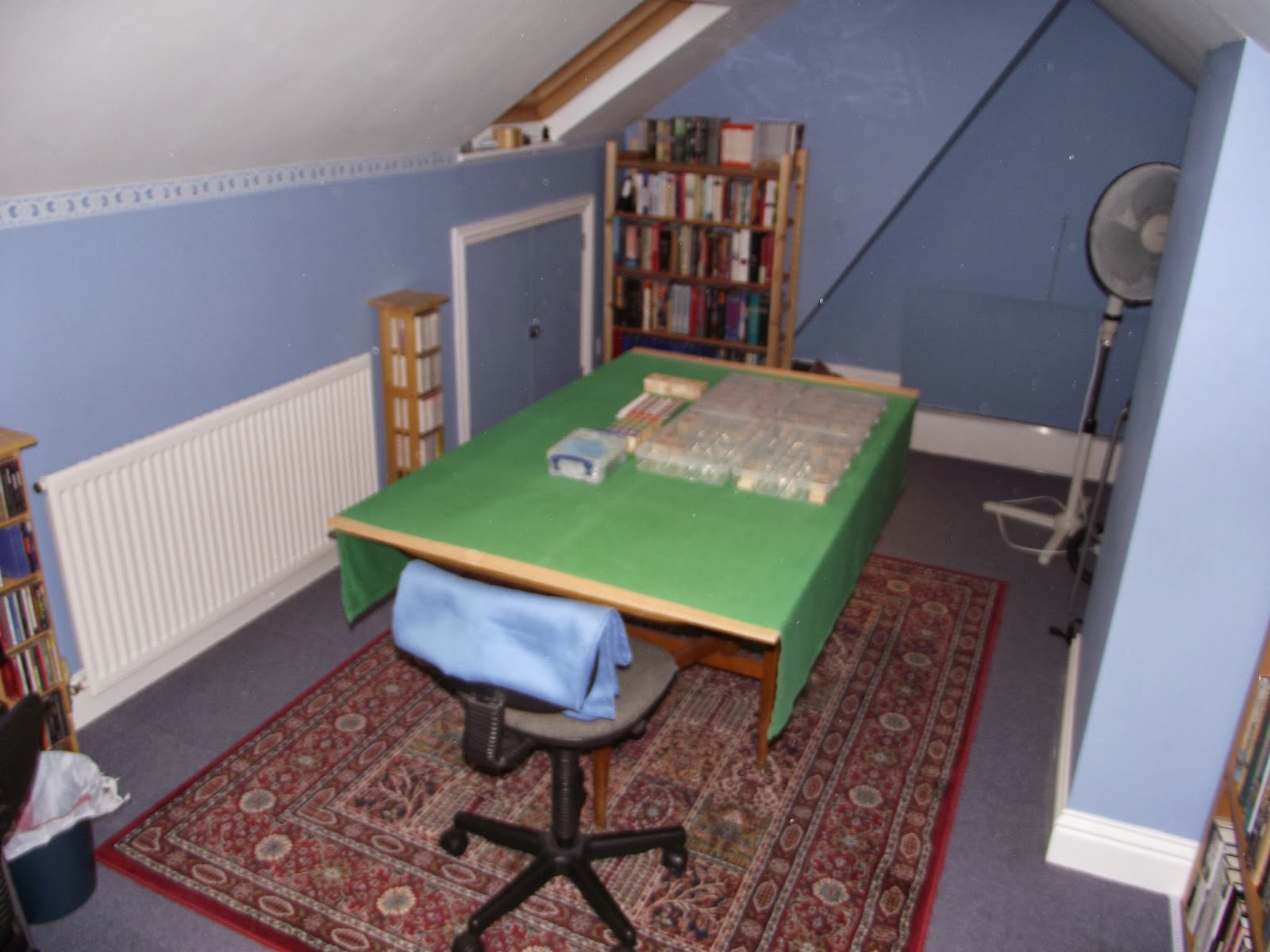 The view from the opposite corner - taken with my back to the stored playing boards seen in the previous picture.  The space around the table can now be seen much more readily. You can see the CD storage towers at either end of the radiator and why I shall bridge them - it will give me another flat surface for 'stuff'. The doors lead into the roof eaves and we also have them on the other side. The loft access is just behind the electric fan. We also have two windows in the roof so in the summer these are often opened to allow fresh air to circulate.

The table itself has some current 'work-in-progress' items - the last two block army upgrades (brown and olive green) and a box of 1/1200th ancient galleys, more of which later....;-)

It looks like a very hospitable and cozy space. Enjoy it! The rug beneath the table is a nice touch by the way.

It is a rather cosy billet to be sure and I have some big plans for the coming year up in the Eagles Nest.

As a long time student of matters Turkish and military the rug was rather appropriate (sadly it came from Ikea rather than Anatolia!).

Color me jealous, sir! All I have is a corner of our flat...

You have done an excellent job of reorganising your room. It looks very attractive and seems to have more space in it as well as more storage.

I hope to see it for myself one day.

Having the space around the table is a huge bonus and makes the whole room far more comfortable when having face to face games - which I fully intend to take advantage of!

I am lucky - lucky that my son decided to get rid of his multi gym that took up the entire area covered by the rug!

It took longer than I thought to do but like all good ideas, seemed so obvious I wonder why I didn't do this way round to begin with!

The storage is roughly the same but is far more organised so it actually feels like more.

I certainly hope that you will get to see it again - and I hope to have a good scenario set up for the occasion (plus the fish and chips).

Nice little man cave indeed. Unfortunate about the rug being Ikea instead of proper Anatolian make.. future trip maybe required? Curious on how the heater shelf will turn out, and if it will be safe enough to put things on or now. Considering the heat :)

I am rather pleased with the end result although it has taken three attempts to get it right!

Funnily enough we saw some beautiful handmade rugs on our last visit to Turkey but they were eye-wateringly expensive.

The shelf will be a plain plank of the appropriate size but the heat should not be an issue as the radiator is not on very often.

It will make for another surface though which will be useful.

Looking forward to seeing the plank and hearing about how it holds up. I have something similar in my man cave that if I could make a shelf out of it, then I could get a lot more space as well!

I am hoping to get the plank issue resolved at the weekend and will be sure to post a picture when I do.

I have no doubt that I shall visit Turkey again and who knows? I may just pick up a genuine rug when I do.

Cozy is the first word that came to my mind. Looks like a good place to retreat to, if perhaps a trifle neat :)

It is a cozy nook and is rather tidy although that was because I had just finished organising it!

I am not normally so tidy (although not untidy by any means) but it gave me a chance to see what was what and where was where!