As part of my WW2 naval project I thought it would be a good idea to revisit some old friends in the library for the all important inspiration. With this in mind I ascended into the man cave and pulled out three titles, the first of which you see below. 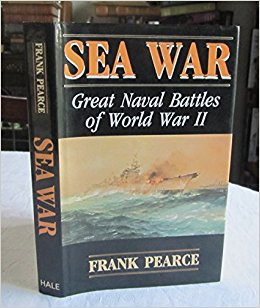 This is not my copy as I have the hardback version
Sea War: Great Naval Battles of World War 2 is one of those primer type books that are always good to refresh one's memory with. By no stretch of the imagination can this be described as a definitive account of the actions described but it does have much in the way of useful information - particularly log extracts and eye witness accounts. In short it provides the reader with plenty of flavour but for more fuller analysis of the actions contained therein one would need to research further. It is a good read to get 'back in the groove' though. The chapters are as follows:
The Loss of the Courageous
The Pocket Battleship Graf Spee
HMS Glowworm: The Supreme Sacrifice
The Defence of the Aircraft Carrier Glorious
The Taranto Raid
The Battle of Cape Matapan
The Battle for Crete
The Evacuation of Crete
The Mighty Bismarck
Singapore - The Loss of Repulse and the Prince of Wales
The Soviet Convoys
The Ship that Torpedoed Herself
The Story of HMS Edinburgh
Midway
Onslow's Valiant Defence
The Destruction of the Scharnhorst
The Allies take the Offensive
The Battle of Leyte Gulf
The Eclipse of Japan
All in all it is not a bad read and in conjunction with the other two volumes (which will appear in the next post) gives me a nice foundation to work from as far as inspiration is concerned - especially now that the appropriate volume of Conway's Fighting Ships (1922 to 1946) is back in the library.
1500 not out....
This is post number 1500 since I started the blog way back in 2009 whilst I was between jobs. I am pleased with much of the content (although there are some quite embarrassing wargames 'blind alleys and contradictions' in the post list!) and I certainly have enjoyed the resultant commentary from readers. I looked back over some of the material and from where I was then to where I am now has been an eventful journey - but it is one that I have enjoyed making and I hope to continue to do so.
Many thanks to all for helping me to get this far and I hope to have you onboard for the next 1500!
﻿
﻿
Posted by David Crook at 09:09

I seem to remember reading the book when it was first published, but I never owned a copy, it should give you lots of ideas for your forthcoming campaign.

Many thanks re the blog entries - it has been an interesting journey so far and one that I hope to continue.

The book is not a bad primer and it certainly serves to get your head back in the 'zone' so to speak.

It has given me a few ideas which I have squirreled away for future use.

as for the 1500 that's a great milestone. It is sometimes a challenge to think what you'd like to say and also make it entertaining and relevant for the audience. I really enjoy your blog but don't comment that often,

Many thanks for your kind words - they are much appreciated. I must confess that I went through a phase of writing posts because I felt I had to rather than because I had anything meaningful to say - happily I have moved away from this!

I am very excited about the WW2 naval project and it has given me a much needed shot in the arm so to speak.

The book is not bad but the two up next are far better in my opinion. Again, these are not the last word on the actions depicted but they give a great sense of time and place, the all important flavour!

It is not a bad primer - think of it as a warm up before a proper gym session!