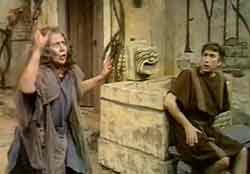 A great TV series but one would suspect the PC brigade may well be saying something along the lines of "Ooooer Missus...."

"....And it came to pass...." The usual opening dialogue from the late and great Frankie Howerd at the start of the TV show Up Pompeii.

Those of you that know me well know that I am slave to chesty, throaty coughs and general nastiness, particularly at this time of year (along with the rest of the country but please indulge me). Well this year I had thought that I had managed to swerve it although the rest of the family were afflicted at one point or another over the festive period. Well, I have a relatively minor bout at present and it is largely confining itself to an irritating ticklish cough that seems reluctant to shift (but it is not getting any worse which is small comfort).

Fast forward to yesterday and I was on my way to the office - in fact I had virtually arrived - when disaster struck. It had been drizzling so the very smooth paving stones had a top coat of water. I was quite pleased to have arrived to get into the warm and dry but the fates had decreed otherwise. Essentially my right foot failed to gain any purchase on the said paving stone with the result that my ankle rolled in an unnatural direction one way whilst the rest of my bulk went the other. I hit the ground with all the grace and poise of a sack of potatoes.

My right ankle is badly swollen (although this has abated somewhat after the various gels and industrial strength painkillers) and my left wrist - the one that tried unsuccessfully to break my fall with - has taken on some interesting and psychedic hues. The best bit though, was the small matter of the crack in one of my ribs on my left hand side as I straddled the kerb. So, two bad bruisings and a crack were the net result and yes, my choice of vocabulary at the time would have shamed a Levantine Stevedore agitator (you can have ten points if you tell me what book that expression came from).

To be honest they are all painful but not life threatening and I should be back to passes for normality in a couple of days or so. I even went into the office for the day straight after although I am at home now.

Of the three injuries I sustained the rib is the most wearing one - especially with an irritating cough. It does present a few challenges when you are sleeping as well....

In the meantime though....

My short break (no pun intended)  has given me the opportunity to give some thought to my 'grand design' and how this will take shape. A throwaway comment from one of my blog followers, david in suffolk  has set a train thought in motion - the results of which will appear in a later post.
Posted by David Crook at 14:56

Ouch! That sounds very painful ... and if you'd had a drink or two begotehand, you'd probably have walked away unhurt.

I hope you recover very soon.

PS. A Levantine Stevedore agitator? Would that be a quote from the Guns of Toblerone?

Many thanks old chap! I am afraid I dont bounce as well as I used to!

I have been known to have the odd glass of sweet sherry but even I would be challenged to imbibe at 7:45 am!

You are quite right about the quote - given my interest in the Aegean during WW2 (and the region as a holiday destination) it is one of my favourite books.

Take it easy, and remember to drink plenty of fluids when taking medication.

Reminds me of the time - about 40 years ago, now, when I made the remark at work, 'I knew it was going to be a bad day when I fell over this morning.' I was rather surprised at the belly-laugh that evoked! The incident was on the way to work, when the metal heel of my new shoes lit on a slick (quite dry - it was a fine morning) bit of asphalt pavement. My foot shot out from under, and arse over kite I went. No damage - but a tad embarrassing...

The day, as I recall, did not improve.

Ouch i hope you have a speedy recover mate!

Plenty of hot lemon and honey is the order of the day!

The funny thing is the first thing I thought as I hit the ground was “Crap, there goes the IPad!”. Luckily it landed on something soft - me!

After the embarrassment had worn off I then realised which bits were hurting and then the fun began - trying to stand up.

As I mentioned individually the injuries were nothing serious but as they were at odd points of the anatomical compass they were quite debilitating.

Especially with a chesty cough...

Thanks old chap! The ankle is more or less there as long as I dont roll it excessively and the wrist is in the same shape. The rib is the main problem - simply because of the chesty cough/cold I have.

Coughing and sneezing are pretty uncomfortable at the moment but, I’ve had worse.

hope you are on the mend, glad my comment gave you some ideas - now, if only I could find my copy of the book I mentioned... it's here somewhere!

I am feeling very much improved although the cough is proving a little stubborn. Luckily I know where my copy of the book is!