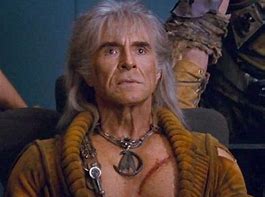 "To the last, I will grapple with thee... from Hell's heart, I stab at thee! For hate's sake, I spit my last breath at thee!" Khan Noonien Singh, commander of the Botany Bay and first seen in the Star Trek (original series) episode Space Seed and of course the film, Star Trek 2: The Wrath of Khan 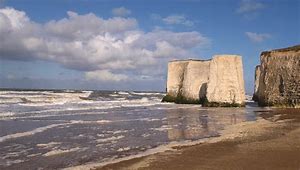 The other Botany Bay near Broadstairs in Kent - our destination to celebrate Laurel's birthday and our first wedding anniversary. We stood by the chalk cliffs you can see - luckily the tide was out.... 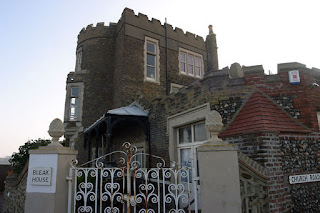 A trip to Broadstairs can only mean one thing - Dickens and the original Bleak House. The weather was overcast, windy, cold and drizzle-laden so Bleak seemed an apt name.... 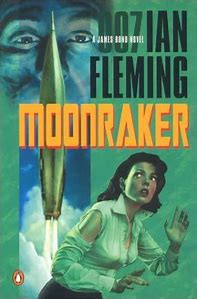 The Isle of Thanet was of course the setting for Ian Fleming's James Bond novel of Moonraker as well as the early stages of Goldfinger . I chuckled inwardly as I remembered Fleming's description of the 'Bungaloid world' of Herne Bay, Whitstable and of course Reculver where Goldfinger had his smelting facility. We drove along that wonderful stretch of the A28 (again mentioned by Fleming) from Canterbury via Chilham up through Molash and Charing and on to Maidstone.
The 13th February was not only Laurel's birthday it was also our first wedding anniversary so we decided to have short break away. I made all the arrangements and so we spent the night at a small hotel overlooking Botany Bay. The hotel was fine and the food was outstanding. The only problem we experienced was the weather in that it was cold, windy and drizzling all day. The second day was much better and so we were able to take a short walk along the beach before departing.
I should mention that we took a rather circuitous route going on our outward journey - via Manston and the Spitfire Museum (sadly not this visit but earmarked for the future) and through Broadstairs - but the return home was through Margate, Birchington and then swinging south at Canterbury﻿
via Chilham, Molash, Charing and Maidstone.

Charity shop find (there was no shortage of these in Maidstone - we visited 5!). This is the hardback version of Tom Holland's acclaimed account of the last century of the Roman Republic. This is a favourite period of history for me as the Romans took on a wide variety of opponents as they drifted towards the Empire.
﻿
﻿
I was a little disappointed with Maidstone as it seemed quite ragged around the edges compared to when I lived there some years back. Perhaps I need to polish my rose-tinted spectacles a little! The book above is one I have been after for time as my paperback version has all but disintegrated. I must confess to enjoying the wars of the later republic rather than the more usual Imperial phase. I have a small section of the library devoted to this era and will certainly game something from it at some point.
The book was really a bonus on our whirlwind tour of Thanet and despite the weather we had a really good time. Laurel was happy and we have resolved to visit the area again at some point - preferably when the weather is around twenty degrees higher....
(I also want to go to the Spitfire Museum...)
﻿
﻿
﻿
﻿
Posted by David Crook at 10:09

It's a long time since I saw the film, but I see Herman Melville is still to be read in the (whichever)st century. You would have thought Khan could come up with his own line?

The original Bleak House! I didn't know about this place. Looks suitably Gothic.
And I do like the tenuous link to Star Trek - nice work. "He tasks me. He tasks me and I shall have him! I'll chase him 'round the moons of Nibia and 'round the Antares Maelstrom and 'round perdition's flames before I give him up!" Khan at his best.

Khan was played with a large layer of ham by Ricardo Montalban and he had some other pretty good lines in the film.

Now you mention it Kirk was quoting Dickens in the same film - "It was the best of time, it was the worst of times' - A Tale of Two Cities as I recall.

Bleak House looked even more bleaker than usual which was not surprising given the weather! I don't know why but when I first saw that we were staying at Botany Bay the pseudo Russian voice of Chekhov came into my mind: "Botany Bay?...Botany Bay!..Oh no!"

Khan had some great lines in the film and I have to say it was one of my favourites from the sequence.

What was in all those diaries that were burnt?

I have a soft spot for the late republic as the opposition is pretty varied. Gauls, Germans, Parthians, Numidians, Armenians and many more besides. It is a great book and I was really pleased to get a hardback version.

Not sure I follow you about the diaries - you will have to give me a clue!

It is early on on the book
I will not spoil it for you but egg you on to at least read the first chapter ;)

Thanks old chap - best I get a move on then!