A Return to the Swampy Bayous.... 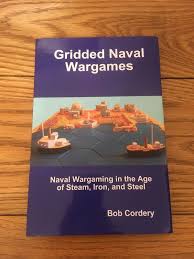 Bob Cordery's excellent book on naval wargames using a grid - and with much more besides. Note the rather fetching scratch built models in action on the cover.

My relationship with the American Civil war has been a chequered one for sure. I have bought and sold more material for this period than any other I can think of over a period of some forty years or so. Age has mellowed my temperament somewhat and so I am now able to see the war between the states with a greater sense of objectivity about the military and naval challenges the conflict offers the wargamer. My recent acquisition of the four volumes of Battles and Leaders and of Thunder Along the Mississippi have reinforced my intentions with the period and I would also add that Battle Cry - the Richard Borg designed Command and Colours boardgame - was probably the instigator of this apparent renaissance.

My situation at present with the ACW is that aside from a copy of the aforementioned Battle Cry my only investment in the period is around 40 1/600th ACW ships from the Peter Pig Hammerin' Iron range, together with some scenery. For figures I was considering using a fusion of Tumbling Dice and Peter Pig 1/600th figures in support of the ships or alternatively my block armies. Readers of the blog will no doubt recall a couple of river based games I fought using a combination of the block armies and my scratch built river forces. Two of the most notable games can be found here:

Raiders of the Lost Arkansas The CSS Arkansas in trouble....

The Attack on Fort Duvet These games were fought a long time ago and reading the blog posts associated with the great scratch building effort I undertook to produce a pair of river fleets (there were over fifty ships in the collection eventually of which around a third were painted - only the ironclads for both sides) reminded me of how much fun I had actually building the ships.

I enjoy scratch building and whilst I do not profess to be a super detailed modeller producing ships for the American Civil War is not difficult. My old friend Bob Cordery has produced some really nice generic ship models and indeed, details how he made some of them in his very useful book Gridded Naval Wargames. Bob is very fond of making what he calls 'Cartoon Style' models - models that have the overall profile of the intended ship but with length shortened whilst being exaggerated in respect of height, typically with the use of Hexon tiles in mind. The big advantage of this is that whilst the 'footprint' of the model is small in relation to the height it looks better alongside the figures being used. Using the cover of Bob's book as an example these models look absolutely perfect alongside his Sudan collection. I think for my planned needs I probably have too many models to consider with the Peter Pig collection - which was also true of the scratch built collection of several years ago. Dare I say it? It was a classic case of 'project creep'.

With this in mind I have taken the decision to part company with the Peter Pig collection (this time for definite!) as I want to build the models rather than use commercially available versions. It will take longer to get them into action but since I only envisage needing around a dozen models it should not be too onerous.

I have learned a lot from the original scratch building project in terms of construction techniques to know what I need to do this time around as the models will be more generic and will also be larger than the previous versions. Whereas I was modelling specific ships before this time around I shall focus more on the type being represented.

With the above in mind I have been quietly stockpiling building materials and so hope to start work once the WW2 ships have been finished.

The middle picture with those three gunboats looks just the sort of thing for an exciting combined operation. I like those little 'Cairo class' ironclads, too.

... Ah! A closer look and I now realise that the yop boat is none other than 'CSS Arkansas'.

The model for the Arkansas was what i refer to as a generic casemate ironclad and the shape and dimensions are, shall we say, interesting....I built all of the City class gunboats and made sure that the funnel bands were correct for each one. I did not paint them on as i used coloured sticky paper cut into strips and then stuck on the funnels. I am not great at painting straight lines on curved surfaces!

The other model is the USS Essex and I had a lot of fun shaping the curved section at the end of the casemate.

The models I shall be looking to build will be larger than these and probably more generic looking and I have already thought that I will need more than a dozen. I reckon around two dozen will be more than sufficient.