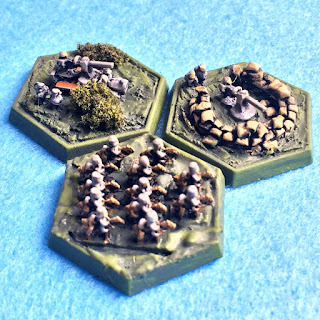 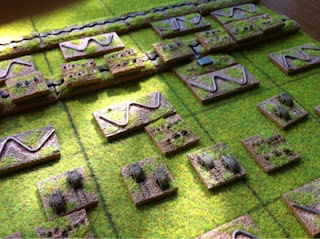 Not sure if this is 2mm or 3mm but you can see the potential with these diminutive models.

Now the real work begins and so I have taken my first steps into a wider universe. I have prepared an order for some 7mm dice frames as well as the bases I need for the 1/600th scale ACW ships. In the  meantime I shall look to assemble the ships and ready the infantry – which at this stage will also include support weapons (machine guns and mortars) and the artillery for WW1. I have a selection of tanks for the period as well which will probably feature and I will also look to add some aircraft at some point.

For the actual painting I shall experiment with a variety of techniques but at this stage I am thinking a black undercoat with the uniform colour dry brushed and then pick out some details – flesh, weapons and packs etc – where I can.

In respect of the infantry I will need to clean up the strips and cut them in two – as there are no gun crew figures available from Tumbling Dice I shall use a pair of infantry from the loose order strip (therefore a single strip will provide the crew for four pieces) and possibly something left over from the support weapon pack as there are some useful types contained therein. Mention of support weapons – in this case machine guns and infantry mortars – has reminded me of the question of how I should be representing them. I am thinking of using a 20mm square base for machine guns and a 20mm round base for mortars as this will enable easy recognition on the table top although I have yet to finalise this. The key decision I have taken though is that they will not be on a full sized base.

Following on from my post of yesterday I have spent some more time considering the whole ‘hexed playing area’ scenario. I have nothing against Hexon and indeed, have previously owned the same. For my needs it is a little on the large side given that the figures I am using for this project are so small. Heroscape would work well although the hexes are a little on the tight side for my planned 40mm bases. In retrospect using bases with a 30mm frontage  may be better but even using 1/600th models these will look a little crowded. I have a number of ideas that my Heroscape will be useful for but I am conscious of the fact that if you fill a hex with terrain then adding a large base of models  will look a little untidy to say the least.

If I am honest the thought of using 1/600th scale armies is very appealing and certainly there is a large selection available. Most of my gaming these days is solo and so setting up a large table with hundreds of larger figures and terrain to match has certainly lost its appeal up to a point. Having said that I am not so lacking in soul that I am entirely abandoning larger figures as I have in mind a 30mm old toy soldier style set up (more of which later) and will get some models together for What a Tanker or similar but overall smaller is definitely the way forward for me.

My planned hypothetical Balkan set up will see the light of day but probably not in the format originally mooted and certainly earlier that the 1870s. I have found myself drawn to the period of Russian and Turkish cooperation over the Ionian Islands with a dash of Great Britain and of course the French. This is very much set in the 1800s so at his stage I am unsure how best to tackle it and in any event will need to do some further research on the period in due course.

As ever, much to ponder methinks....

The figures and models look far more detailed than I expected, and will look impressive on the tabletop.

Good luck with you project.

The figures from Tumbling Dice are closer to 5mm than 3 but are very generic looking which is a very important consideration as far I am concerned. I have look at some of the models available from Magister Militum and they are very nice indeed although a lot more detailed.

They will make a nice alternative to the block armies.