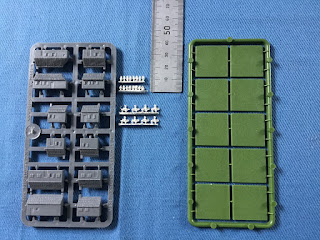 Apologies for the repeat picture as this has also appeared in an earlier post. What you see are some Tumbling Dice cavalry and close order infantry alongside some Perry Travel Battle buildings and some Renedra plastic bases.
﻿

With the increase in temperature over the weekend (not to mention a few other domestic issues) I was not able to get any painting done in the man cave. This has put my WW2 ship painting schedule a little behind and this will not be helped by the new bathroom that is being installed this week.

As is my usual modus operandi when there is 'stuff' going on of a domestic nature I tend to take what time I can when I can to consider matters hobby related - yesterday was a good example of this - so I found myself with a couple of spare hours in the evening. In truth I was not especially motivated but I made myself get on with something, the results of which are in this post.

I have an interesting selection of 1:600th scale figures, vehicles and terrain pieces. Initially the collection consisted of Peter Pig blocks supporting their ACW naval range. The infantry and cavalry are in blocks, skirmishers are on a strip in a variety of poses and the artillery is deployed to fire with a limber on the same base. The artillery piece is of a block trail type as befits the ACW.  There is also a rather nice mounted command base. the infantry are some four deep with a pair of standards cast into the block. The accompanying terrain includes a resin farm and some metal buildings - designed for harbour use - together with some wagons. There are also some resin fieldworks and a couple of forts again, designed with their naval range in mind.

Given the generic nature of these models my initial thoughts about using these was not for the ACW. The infantry blocks look too deep for my taste for the period and are better suited to something earlier in my opinion. I am seriously thinking about the Napoleonic Wars with these although it will be a while before this is realised.

The Tumbling Dice models have the advantage of being individual figures rather than blocks. They are cast on strips and whilst being more detailed are still suitably generic enough to be useful for pretty much anything. the loose order strip has 8 figures grouped in pairs which could easily be cut into half for such things as 4 figure fire teams in the 20th century or earlier skirmisher types. the close order strip I would use for the later half of the 19th century, in conjunction with the Peter Pig command base and artillery. The artillery available is of WW1 vintage and not only are the guns separate but also the limbers and wagons. there are no gunners as such but the loose order strip, cut down would furnish usable crew figures.

My WW2 vehicles are from Tumbling Dice and at present consist solely of tanks. The range includes a few variants of specific types and some assault guns but is short of transport and nationality specific artillery and anti tank weapons. The 3mm models produced by Oddzial Osmy and Pico Armour are a little on the small side compare to the Tumbling Dice kit but that is not a problem for the numbers I would need to use.

As it stands at present I am looking to produce three or four generic looking 20th century forces with nationality specific vehicles and kit dropped in as required. In a way this will be a step up from the block armies as, for example, a Khaki brown figure in this scale could be used for a number of armies from the Balkan wars onwards.

I rather fancy something from the latter 19th century using the Tumbling Dice range but am undecided as to what. I shall give this some thought.

In the short term though I need to get the WW2 ships finished just as soon as the temperature is a little less lethargy inducing!
Posted by David Crook at 10:06