"A beast approaches, and it was King Leonidas himself who provoked it." 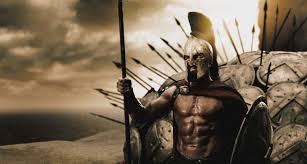 The climax of the film 300 - the Spartans and Greeks have been betrayed by Ephialtes and are now surrounded by the Persian host. A beautiful death and immortal glory awaits Leonidas and the remains of the 300.

Now I know as well as the next man that the battle of the 300 Spartans as depicted in the film 300 bears little resemblance to what actually happened but it is a great film all the same albeit in a comic book over the top kind of way. I thoroughly enjoyed it, 300: Rise of an Empire less so but it was still a worthy effort. Anyway, the long and short of it was that when the recently launched game by Footsore Miniatures (the company formerly known as Warbanner until the Evil Empire took a degree of umbrage…) Mortal Gods, covering skirmish level games in the Hoplite world (set after the Persian war), then I was always going to take a look at it! So I did and immediately picked up a copy. 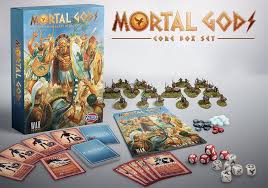 The core set contents and yes, there are other figures available as well as sets for Athens and Sparta...

The game contains 32 28mm plastic figures from the Victrix range for the period so there are armoured and unarmoured hoplites, peltasts and slingers. I had a few problems with some of the figures as the box they come in has very little in the way of packaging so the heavy components – two decks of cards and bags of dice and stones have plenty of room to roll around. A quick phone call and all was sorted so some replacement figure sprues are winging their way to me.

The game can best be described as follows:

“Mortal Gods is a skirmish tabletop game played with roughly 15-25 models on each side. Players select their warriors before each game based around a single heroic leader, or ‘Lochagos’, and a number of loyal companions and heroes forming a single Lochos (war band).
Battles are swift and bloody as players alternate acting with one warrior or a group of warriors – moving and fighting to achieve the scenario objectives, whether that be cutting down the enemy, defending an outpost or finding and protecting an important character.
The rules are available as a box set consisting of a Rulebook, Roster Cards, Gift Cards, Omen Cards, Injury Cards, Damage Dice and Mortal Gods Dice.”
To be honest I certainly like the look of the game and there are a few folks at the club that are into this which is useful. However, in my usual way I am looking beyond the obvious and so will be expanding the figure collection to eventually produce a couple of forces the new Osprey rule set Men of Bronze – which covers hoplite warfare with forces around 50 to 80 figures per side. Obviously DBA could feature as well as the Portable Wargame or even Command and Colours should the need arise. There are also plenty of Greek mythological figures around so Dragon Rampant or HoTTs  may even feature.

My plan originally was to put this way down the batting order but it is very tempting to crack on with it as the figures are really nice and with a myriad of uses.

David,
I am expecting Men of Bronze to be delivered this afternoon. I have wondered if it might be an interesting game to be played on small tables. I will have a read and see wit takes me...

Nowadays I base my units so they work across several skirmish games, so that I can play any that take my fancy.

It's so few figures to paint and a very fun game. I'm really enjoying it!

Nice and compact - just as a good game should be!

It looks pretty good and with a figures count that even I could manage - well, just about anyway...

I am looking forward to having a dabble with this but I know it is the (very) thin end of the wedge...