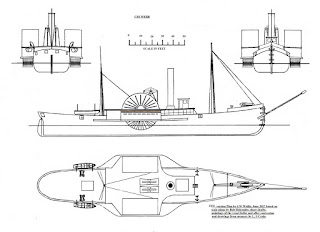 A speculative plan of the C.S.S. Webb - note the twin ‘walking beam’ engines. Her paddles were powered independently which meant that at low speed she was very manoeuvrable but much less so at full power

Work has begun on the next batch of five models for the ACW project. I have also settled on what he remaining models after these five are completed - and a small order to Warbases was needed to furnish the appropriate parts. Allowing for the time it will take to build the five currently under construction and four of the remaining ten models I should have the pieces I need for the final half dozen.

Summing that rather convoluted paragraph I have sufficient material from stock to build nine of the remaining fifteen models with the final six following once the Warbases order arrives!

The five currently under construction are all fully masted and so will take a little longer to complete. Building masts is far easier than building octagonal or curved casemates - even box casemates come to that - but one has to be careful as it cannot be rushed. So I have fifteen masts and five bowsprits to tackle - luckily they will all be more or less the same design so an assembly line of sorts can be used.

I am building three ships for the Union - a frigate and two sloops - and a pair for the Confederates - a commerce raider and a blockade runner although the latter may not even require the full sailing rig as I have yet to decide which one I shall build. 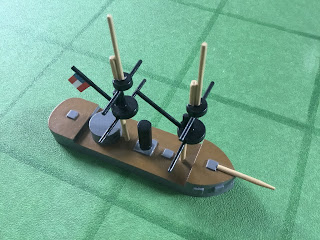 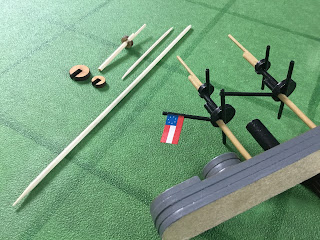 A view from the underside again showing the intentionally larger ‘sticking’ points. Also showing are the raw materials I use and a mast built for the now abandoned third 90 Day gunboat that will be repurposed for a Confederate ship 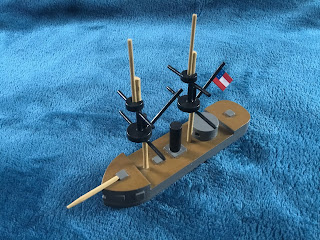 For services as a model in the pictures above it is only fair that I show the C.S.S. Stonewall in all her glory! It seems like a long time ago that I built this particular model and her sister ship!

My mast building technique is quite stylised and the end result is pretty robust. I use Bamboo barbecue for the masts and wooden cocktail sticks for the spars. By using MDF cut fighting tops in strategic positions I am able to get a good area for glue coverage so the spars have a larger area to be stuck to. Where a spar is free standing I carefully file a shallow recess on the upright so that it ‘sits’ in rather than on the mast. Again, the area is larger so that the glue has more surface to bite on. I use superglue exclusively for my masts.

Why the C.S.S. Webb? Well, she lasted a long while to start with and by virtue of having two walking beam engines was pretty fast in a straight line. I am currently gauging opinions as to how fast she actually was but she was able to break out from the Red River and breeze along the Mississippi at a fair pace until confronted by by a Union sloop. At this point her crew ran her aground and set fire to her.  She was originally built as an ocean going paddle wheeled tug but was equipped with a ram and a spar torpedo in addition to her artillery when the Confederates added her to their forces.

I have settled on the models I shall be building for the final batch of fifteen with the sole exception of the Rebel blockade runner. I shall send some time thinking about this over the weekend but for now it is one with the mast building.

Another fine looking model and a great addition to the fleet.
Regards, James

She came out rather well but to be honest, with the honing of my building technique there are a few things that I would have done differently.

She is staying as she is though!