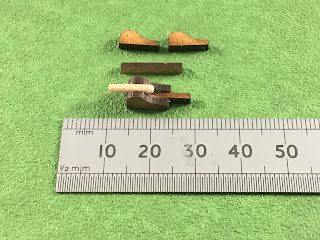 It has been a quiet, family focussed bank holiday weekend - our grandson was with us - so very little gaming related ‘stuff’ has been tackled other than trying out my newly cut gun carriages for the ACW naval project.

Many of the vessels in use during the ACW featured deck mounted artillery - either purpose built and designed that way or when converted from civilian use - so I needed to be able to include these on some of my models. Originally I planned to use the guns available from Peter Pig in 1:600th but these look too detailed as well as being too small. I came up with with stylised design for a deck mounted naval gun carriage and duly ordered the same from Warbases. These arrived a short while ago and as my latest batch of models features gunboats on which this type of weapon featured it made sense for me to take a look at how they went together.

Essentially there are two carriage ‘cheeks’ and a central spacer. This is deliberately longer than the carriage pieces to represent the railed pivot style mount that some of this ordinance employed. If the guns are fixed in place rather than pivot mounted then all I would do would be cut the central spacer back to the edge of the carriage ‘cheeks’ and then pare the smaller edges back a touch. This would serve to differentiate the larger artillery from the smaller and when the first of the ‘90 Day’ gunboats are ready you will see what I am rambling on about.  The gun barrel itself is furnished from a 1cm long piece of cocktail stick with one end filed into a curved shape. The size of the spacer to which the two carriage cheeks are glued is exactly the same width as a standard wooden cocktail stick - a cunning design feature for which I can take no credit for! 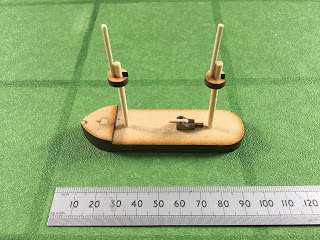 The beginnings of one of two 90 Day gunboats currently under construction. The masts are not quite finished and are not fixed in place. The remaining three guns on this class of vessel are of a smaller calibre with one mounted forward (you can see the drawn location) and the other two mounted on either beam near the rear mast. The ‘pivot gun’ you see will be about an inch further forward in the final version - the funnel will be where the gun barrel is!

I currently have a pair of ‘90 Day’ gunboats for the Union and a couple of similar types for the Confederates. Each of these will need four gun models.

I am really pleased with how these have come out and whilst in the pictures they are unpainted and indeed, in the case of the ship, unfinished, they look pretty good and fully in keeping with the level of detail I have been working to.

Very nice! I'm guessing you can represent larger or smaller guns simply by varying the length of cocktail stick used.

I think that your deck guns are ideal for your ACW ships. They look relatively simple to put together but have the right look.

Very nice work David, but it must have felt terribly exposed when on deck.

That is exactly right. The gun barrels will come it two sizes so for the 90 Day gunboats it will be one one large gun on the pivot and three smaller types. I also have a ‘frame’ style carriage but that will be for fortress guns methinks.

They are quite generic looking but certainly look the part and so fit in well with the building style I am using.

They are quite fiddly to assemble - the pieces are small - although simple to do so.

Many ships had a system of folding bulwarks when in action although I did read that the Confederates, for certain vessels, felt that not having any protection was actually safer than having wooden fixtures due to the possibility of splinter injuries.

A gun and crew would be a smaller target than the hull of a ship although as you rightly point out - it must have felt dreadfully exposed!

Thank you kindly old chap - much appreciated. The technique is not really original as using layers to build up hull is an old method going back years - I can remember building up the hull of the Goeben using layers of plastic card back in the late 1970s - but using MDF as an alternative works really well. It also has the big advantage of being cut to a uniform size.

All I have done is to make use of what materials I have to hand and then just getting creative!

Hi David -
Uh... maybe I ought to have looked at this posting BEFORE arming with S/B cannon a xebec-rigged sloop of war (that's what I'm calling it). In 1876, rather obsolete globally, but on the remote east Aithiops coast of the Indic Ocean still able to hold their own...

I must admit that having assembled the first eight of these deck guns I am sure that there are many other applications for the same technique!

When I eventually get to Madasahatta again some armed Dhows/Xebecs or similar will certainly feature although I would look to get a differently shared carriage cut - something more asking to the standard Napoleonic style carriage.

I shall look out for their exploits in the Indic Ocean!