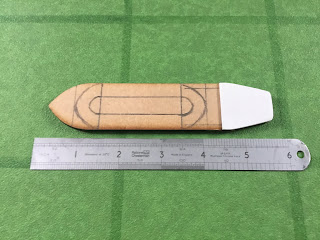 The work in progress - the white section is plastic card and needs further shaping but bear in mind that this model is, as usual, based upon rather than historically accurate!

A bird’s eye view and profile of the C.S.S. Virginia

After having completed the pair of 90 Day gunboats for the Union I decided that next up will be the remaining pair of Confederate casemate ironclads. When complete I will have a round dozen of them - six modelled on actual ships and the remaining six more generic in design. Of the final two I am building one of them is of the smaller octagonal casemate type whilst the other is the famous C.S.S. Virginia of the Battle of Hampton Roads fame. Pictured above is where she is at for the moment - in other words at a very early stage of construction.

She will be the longest ship in the collection and indeed, I had to modify a standard hull template to allow for the rear overhang designed to protect the steering. I am more or less happy with the hull and the real work will be building the casemate as she is curved at both ends.

I already have the U.S.S.Monitor built so the prospect of refighting the battle of Hampton Roads is a tantalising one and I shall certainly give it some thought.

Once I have finished these two ironclads I shall revisit the Union as they will be getting a further City class gunboat and one other. I have narrowed the choice down to two ships so I will doubtless change my mind a few times before I get to build them!

It was a source of some surprise to me exactly how big Merrimack/Virginia was! an idea of scale here => https://steve-the-wargamer.blogspot.com/2017/12/signs-of-winter.html

She certainly was a beast and a half! My model is ‘based upon’ and there are a few stylistic liberties taken. For example I have square gunport covers - I have a large supply of these and so it is rude not to use them, the pilot house is separate from the front face of the casemate and is not as ‘pointed’ as the original and also the stern covering (and indeed the whole hull itself) are a different shape.

I like to think of it as a Hollywood version!