More on Deck Guns and Gunboats 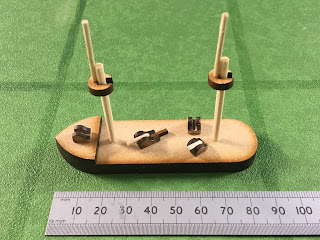 Gun locations on a 90 Day Gunboat. The two sizes of gun can be clearly seen - the larger calibre centrally mounted pivot gun and the three other smaller pieces.

After some experimentation  I came up with a solution for making smaller calibre artillery pieces using the standard naval gun carriage. It is very simple. I merely cut the spacer and trim back the lower rear edge of the carriage and use a slightly smaller piece of cocktail stick for the barrel. I am using 10mm for the larger calibre and 7.5mm for the smaller which gives enough visual difference between the two types.

One thing I have settled on is that I shall paint cocktail sticks black and will cut the gun barrels off as I need them meaning that all I have to do will be to shape the rear of the barrel and touch it up in black. This will be easier than painting them after having cut them out!

These are easy enough to make but are quite fiddly all the same. Having said that they are an essential feature on a number of vessels I am planning to build (and retro fitting some existing models) so having a simple template to work with is hugely advantageous.

Going forwards the same basic principle could be used with other vessels although for earlier types I would want to make a more typical looking gun carriage - for example the usual Napoleonic style nava carriage. Something to think about anyway.

The ship and guns do look great Dave.

Very much a work in progress but I am pleased with how the gun carriages have worked out. I should be able to get these two models finished shortly then it will be only 16 to go!

Still a way to go with these two - finish the masts, fit the deck hatches, drill out the flagstaff hole, source the funnel and think about the bowsprit but now I have the design mapped in my head it should be pretty straightforward. I have a brace of three masted Confederate gunboats to tackle next which historically were near enough the same size as the 90 Dayers - but were flush decked.

It is getting there for sure!

Great modelling work David. All rather clever and must have involved a lot of planning.

Thank you old chap! I wouldn’t say planning as such - that implies a degree of organisation that has been for most part sadly lacking! My approach has been very much along the lines of the Indiana Jones quote from Raiders of the Last Ark - “I don’t know I’m making this up as I go!”

So far it is turning out alright though!

Another great idea that combines simplicity of concept and ease of manufacture that produces a very effective end result. These will also look great in your coastal fortifications.

The carriages have worked out rather well and will certainly add to the look of the model when mounted. I have some frame style carriages that I was planning to use for the fortress artillery when I get to it.

I am really pleased with ow this idea has worked though - Warbases came up trumps once again!

An elegantly simple solution! Keep up the good work:)

I fully intend doing so!

They are quite fiddly to put together but the end result is certainly worth it. The two 90 Day gunboats are now undercoated so I am hoping to have them ready in a couple of days. I will then tackle the pair of similar looking Confederate types.

It is getting there for sure!