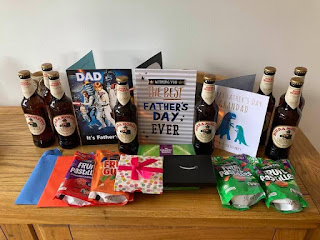 The haul - note the two boxes, front and centre….

Last Sunday was of course Father’s Day in the UK. I have to say that I was spoilt rotten by the children (32 and 25 years old respectively so calling them children seems a little odd - perhaps offspring would be better!). Eight bottles of Italian beer, four packets of fruit pastilles (I have a well known fondness for these) and a box of mint flavoured Matchmakers. My son (who is a very good cook) made a superb breakfast of scrambled eggs and bacon with coffee - in the Ian Fleming James Bond books this was 007’s breakfast of choice - which set the tone for the day. I would also add that between the two fo them I received some £75 in gift cards for the online retailer named after a South American river (I saw that used on another blog and it seemed too good not to use it myself!). 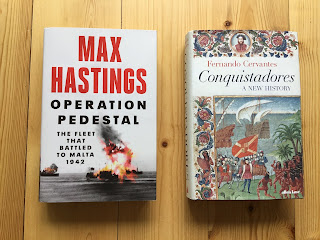 Always nice to add a couple of hardbacks to the library!

I have used half of the value on the two titles you see above that I have my eye on for a while. Operation Pedestal is the newest title by Max Hastings and is the story of the famous convoy that saved Malta during WW2 from imminent starvation but at a very high cost to the Royal Navy. The whole thing would make for an excellent campaign to refight.

Note to self: WW2 naval? You have not done any of that for a while have you? Hmmm…

Conquistadores tells the story of the Spanish conquest of the Americas and again, is an epic tale. For the record I have no intention of tackling Aztec armies although having said that I note that Wargames Atlantic are bringing out 28mm plastic Aztecs and Conquistadors at some point so perhaps a skirmish level set up might be doable.

All in all Father’s Day was a very good day for me although my wallet may not be thanking me in due course! 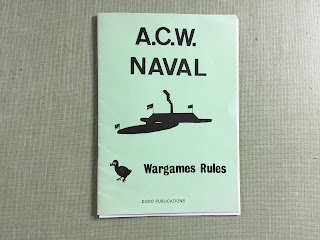 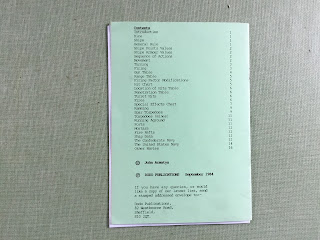 A gentleman that I have had a couple of transactions with over the last years or so (books) is having some building work done and so as part of the inevitable preparation for this he had a sort out of bits and pieces. Among the assortment of goodies he came across the above set of wargame rules. Knowing of my fondness for ACW naval he very kindly sent them to me!

The rules themselves are quite old school and are very much a product of the times (they were published in 1984) in terms of rule techniques. It was only when I looked at the back cover that I realised that the rules were copyright to none other than John Armatys. I had the pleasure of meeting him at COW (the Conference of Wargamers) in 2019 and took part in his Operation Market Garden game.

So to Rob Grace many, many thanks for the rules old chap - they have given me a couple of ideas I had not considered for my own rules.

It has been a good week for the most part in that the collection has gained some new bits and pieces (not forgetting Deadman’s Hand) and I have a clearer sense of purpose about things. A small order has gone into Warbases to rectify the shortfall from what I thought would be the last one but I am OK with the wait.

On a more sober note I found out over the weekend that an old denizen of Newham Wargames Club (actually an occasional member as I recall) and former ACW reenactor via the Southern Skirmish Association has passed away after a long illness.

Mick had more than his fair share of health issues over the years but I remember him taking the part of the Allies when we ran Operation Market Garden using the board game Hell’s Highway. It became a matter of pride that we were able to bounce vast chunks of dialogue from the film A Bridge Too Far off one another with his particular favourite being from Lt. General Horrocks:

Now, I've selected you to lead us not only because of your extraordinary fighting ability, but also because in the unlikely event that the Germans ever get you, they will assume from your attire that they've captured a wretched peasant, and immediately send you on your way.

I’ve never bought books from ‘Orinoco’ are their prices reasonable…😁
I have to admit that I have ‘thing’ about old rules at the moment… I must be trying to relive something… I’m not sure what though.

In both cases the ‘Orinoco’ prices were at least £10 less than the list price which is effectively the price of another book!

I have a theory about old rules in that in some cases they remind of battles and friends gone by - usually with a dash of rose tint - and so are worth having. How relevant they are in the current rules landscape is of course a separate issue. For me a good example was a set of ironclad rules called ‘Devil at the Helm’. I had some cracking games with them back in the day but I doubt if I would use them now as they have a degree of complexity that I no longer wish to use. I would happily buy a set if I saw them though!