An MDF Dilemma and the Glorious 1st of June 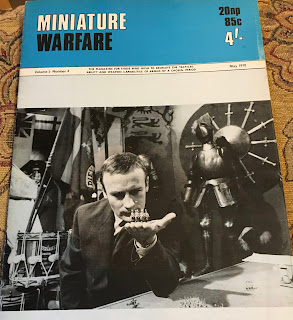 The picture would make a good subject for a caption contest! The late, great, Edward Woodward surveying some figures....

It has been a great bank holiday weekend although not in the way that I planned it! My grandson is with us for the week so games of Boku, kick arounds in the garden, two barbecues and and a visit to the seaside for lunch and stuff have all featured so far. Chelsea won the Champions League on Saturday with what was a tactical masterclass on the night (I have been a Chelsea supporter since about 1970) and hopefully augers well for the next season. The last of the ECW collection has been offloaded and my invoice from Warbases is in so the ACW ships will be moving again fairly soon.

Mention of the ACW naval project (again!) is the reason for this post for a couple of reasons. To begin with I had planned to get a game in over the weekend using some of the newly commissioned models I have built but time ran away from me. Then I received an email from that well known Bon vivant, wit, raconteur and all round good egg, Aly Morrison. Aly happened to be going through some copies from his magazine collection when he came across the edition you see depicted at the head of this post - not that want he sent me was anything to do with Edward Woodward of ‘Callan’ fame (great picture though!)!

Aly very kindly scanned me copies of an article contained within the magazine devoted to the warships of the ACW. This has proven useful for a number of reasons. Firstly, it served as a good but basic primer to the period, secondly there is mention of a book that the article used as reference which got my ‘book hunter radar’ twitching and finally there is a sketch of the C.S.S. Manassas with two funnels. I have seen pictures of her with either one or two funnels and my version has but a single. To be honest it would be easy enough to either convert the existing model or even to build a new one. I must confess that the two funnelled version came as a bit of a surprise when I first came across pictured of her so configured. I shall do a little further digging to see what I can find before deciding. The pages from the article are as follows: 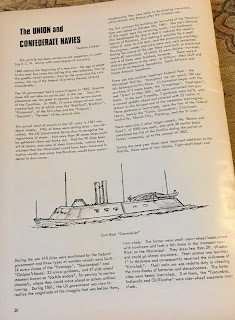 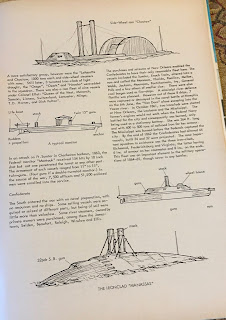 Note the twin funnels of the C.S.S. Manassas.... 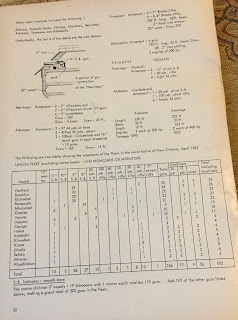 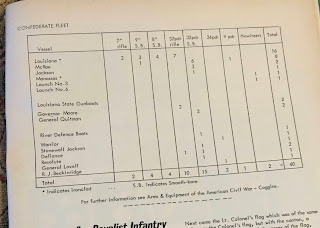 ....and the Coggins title

My thanks to Aly for this article and also to Stephen Corkett - the author.

My MDF dilemma actually has nothing to do with the C.S.S. Manassas nor even the ACW.

Over the last nine months I have really enjoyed the whole designing, building and painting process that has gone into the models for my ACW project. I have developed and evolved some effective construction techniques and the whole process has been enormously satisfying. I have looked at other periods with a view to building more models and have come to the conclusion that my simplistic styling is better suited to some periods than others. With this. In mind I doubt if I will build models for WW1 or WW2 as the ship designs became more ‘fiddly’ in terms of detail. I think that the pre dreadnought era will be about as late as I go - certainly in respect of capital ships.

I have a smattering of ships from the game Oak and Iron which are scaled at 1:600th and whilst not as detailed as those from Warlord Games Black Seas are better gaming pieces in my opinion. They are pretty expensive for what they are though and supplies of them are limited. I have really been struggling to get to a decision about these as I have three options to consider. The first is to keep them and add to them when I can. This has the advantage of meaning that I can go straight to painting them - I have 8 models in all - which in turn will work within my planned pirate project. The second alternative I am thinking about is going down the Peter Pig route and using the generic looking 1:450th scale models they produce for their Pieces of Eight rules. These are solid, robust and generic looking and can be tweaked to suit individual preferences. They are certainly cheaper than the Oak and Iron models. The final option is to design and build my own models.

I rather like the final option but there are a couple of grey clouds over the idea. I do not need many ships for this project - certainly nothing like that for the ACW - so the ‘economy of scale’ factor would not really apply. Time will be at a premium as I am back in the office from 1st July (Indian variant and restrictions permitting) so designing the models, getting the pieces from Warbases and building them will take longer. This is important as I am conscious of a couple of other projects that have moved up the batting order following the departure of the ECW.

In the interest of expediency I am thinking that either using what I have or going down the Peter Pig route will be the way forward as in either case all I have to do is paint the models.

The next scratch building project will be of a similar size to the ACW, if not larger, so I want to make sure that I get the planning phase spot on as I will not have the time for any margins of error.

The Glorious 1st of June

I shall be having my second jab today which is great news. I only hope that the predictions about a possible third wave based on the Indian variant prove to be unfounded but I guess only time will tell.

I was reminded of another Glorious 1st of June  - that being the naval battle of the same name. Many years ago, the denizens of the Newham Wargames Club, based at Eric Knowles shop The New Model Army Limited at Manor Park in East London, were going to stage a refight of the Glorious 1st of June using the Ship O’ the Line Rules (the forerunner to Wooden Ships and Iron Men by Avalon Hill) at the sadly missed Present Arms show formerly held at the Rocheway Centre in Rochford, Essex. Yours truly was tasked with painting and gridding the required boards for the game - I had no models for the conflict but was due to be taking part. To cut a long story short, a little while beforehand I managed to stick a surgical scalpel into the knuckle of my left index finger (I still have the scar from the stitches to this day) whilst cleaning up some 1:300th scale Russian T72 tanks which caused all manner of spectacular leakage and necessitated a trip to A and E. My left hand was out of action (it has never fully recovered) and so I was unable to finish the boards.

As I recall there were a few frenzied calls to Messrs Fox and Hardman and so arrangements were made to take what boards I had completed and to adjust the game accordingly. To say that I was hugely embarrassed is probably an understatement....

As I recall the game that was put on instead was Cape St. Vincent.

They are dangerous things Russian T72s....

I hope all is well with you and yours! Thank you for the link and for sure it has given me a few ideas!

All the best. Aly…

I was just wondering whether the 'two-funnel' CSS Virginia was actually the USS Merrimac, built, I think, in 1864 or thereabouts. That vessel did have two funnels.
Cheers,
Ion

I bought the 1962 edition of the Coggins book in 1964 after it was recommended, I believe, in Wargamers Newsletter. At the time there was not a great deal of information in the UK about the ACW at least as far as I was aware in those pre-internet days. I still refer to it and highly recommend it. My only disappointment was many years later reading that the gunboat was USS Sassacus not USS Sacassus. The main criticism nowadays seems to be that there are no photos only line drawings. I personally like them and if you get a copy am sure you will enjoy it. Best wishes. Jim

In response to your comment I would say that he is considering the the age old discussion between 25 and 28mm figures....

The 1864 Merrimack did indeed have a pair of funnels but she was a side wheeler as far as I can tell. I did not realise until I got deep into this project just how speculative much of our knowledge is about the ships.

An annual subscription for Miniature Warfare? Your fate was sealed....

You make a good point about the information contained therein in magazines gone by - it certainly seems that way!

The pre dreads will feature in due course but I have a few things in front of them first.

Thank you for your information about the Coggins book - I am now even more determined to find a copy! I rather like the line drawing approach so I am sure i will find it useful and pleasing to look at.