Out of Africa - WW1 Style 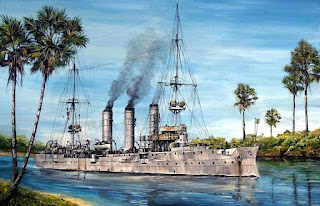 S.M.S. Konigsberg in the Rufiji River

Over the years I have dabbled with various facets of the Great War afloat using a variety of rules and scales - from fleet actions down to low level skirmishes. I have enjoyed many games pitting battling dreadnoughts against their opposite numbers or their older, less advanced ‘pre’ versions, magisterial actions involving battle cruisers and with the full panoply of types available to a modern naval power. It has all been enormous fun. In recent years I have looked more towards the lower level style of operation especially that old standby of naval wargaming - hunting the raider.

The early part of the Great War contained a lot of this type of warfare as the Royal Navy and her allies attempted to round up the overseas units of the German High Seas Fleet and in this they were ultimately successful but at a cost. These ‘hide and seek’ style actions are immensely rewarding as games for a number of reasons. It is a good opportunity to use lighter warships than endless lines of battleships and of course, the older vessels still in service had a vital role to play. Few models are needed so expense can be kept to a minimum.

I have looked at various of the naval operations involving Africa during the Great War and the surrounding seas - the Red Sea and Indian Ocean - and of course this was the setting for the Madasahatta campaign. Naval warfare played a small but significant part of the famous Madasahatta campaign but it was always first a foremost a land affair.

One of my earlier ideas was to expand the Red Sea squadron of the Royal Navy to include East Africa and Madasahatta - with the forces for all sides being upgraded slightly. I planned to do this using Tumbling Dice 1:2400th scale models and indeed, acquired the models I needed - long since moved on to pastures new once I had run out of steam - for such an undertaking.

I still rather like the idea although now it would not be to the scale I planned originally - either in terms of the number and variety of ships available or the ‘strategic situation’. I have a few ideas in mind as to how I want to approach this but the main point of this - and yes, Lake Tanganyika does play an important role - is that I really want to build the models myself.

The Rufiji delta operations against the German cruiser Konigsberg are something else I would like to include so a careful look at the Indian Ocean and Red Sea coast of Africa is something I will need to investigate further but I reckon tying all the threads together should be simple enough.

So what does all this mean? Well, I have always intended tackling something Madasahatta related and so the extra bits and pieces from Africa would add on quite seamlessly. I plan to steer away from great lines of dreadnoughts because this will really be League One naval warfare as opposed to the Premier League - a war of older warships with the occasional modern type making an appearance, of hastily requisitioned civilian vessels turned into ersatz warships and where the largest ships afloat will probably be old enough to vote!

From a practical perspective my building technique is better suited to ‘simpler’ looking ships so the classic pre dreadnought battleship would be about as ambitious as I would consider. I have plenty of material to work with but inevitably there will be the need for some bespoke pieces from Warbases. Cruisers of various types and vintage will feature and working to my maximum hull size of 6” the models will of course be stylised and ‘based upon’ rather than strictly accurate.

The biggest challenge I have at present is the thorny subject of non turreted guns and how to build them. Again, I have a few ideas but some experimentation will be needed.

I would love to be able to say that I would also be raising land forces to go with this but for now I have parked any such notion. The ships will the thing and so there will be time enough to think about that side of things. Besides, I have not even finalised the naval forces involved yet.

Thinking about this logically the entire set up will certainly be smaller than the ACW collection - in my mind’s eye I am thinking around 30 to 40 models - which fits in nicely before I tackle the next ‘big’ ship build. It also breaks down into nice bite size chunks as well so Lake Tanganyika will form one part, Rufiji Delta another and then the Red Sea and whatever happens at Madasahatta.

Easy stages, that is the secret to maintaining momentum!