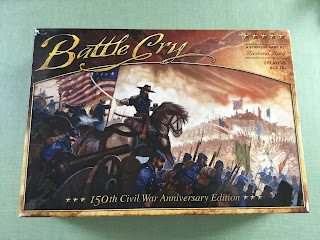 Oh yes indeedy! This time I intend hanging on to it! 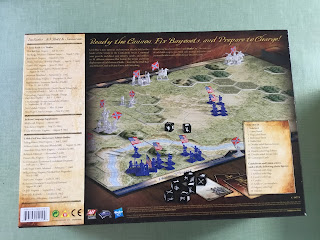 For the first time since I do not know when I had the pleasure of meeting up briefly with Bob Cordery to exchange some bits and pieces and to ‘shoot the breeze’ about matters gaming related and life in general. Bob looked well and was in his usual good form as we chatted about ‘stuff’ after having transacted the all important business.

The business in hand meant that a large box of goodies was heading my way whilst a much smaller box was heading to Bob.

Battle Cry was the first Command and Colours I played and the version you see above was the anniversary 2nd edition which included rather more scenarios than the original version as well as better figures. You will probably not be surprised to learn that I have owned this game previously but had passed it on (and immediately regretted it) so to have it back in my collection is a real pleasure. My Spencer Smith project was based on this and to be honest the idea of revisiting the concept again using painted figures is certainly appealing. I could paint those included in the game but would need to get rather more of them as I plan to use the 6 infantry figure standard on two bases for my armies with four figures for cavalry and two or three gunners for artillery. It is something to think about to tie in with the naval project. 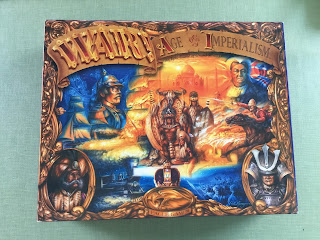 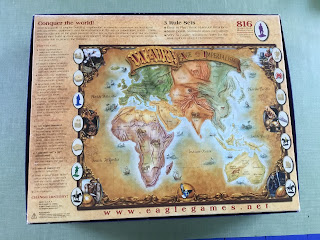 The back of the box - I now want to get the ACW game in this series, again, not for the game as such, just the components aka: The Figures! 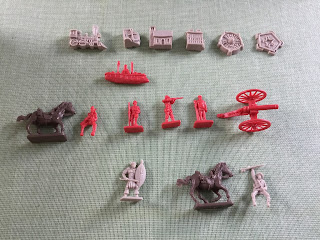 The all important ‘bits and pieces’ - I am confident that I can find uses for most of what is the box!

The second game from Bob’s collection is something a little different and to be honest the sole reason for me getting this is the for the game components. There are 816 pieces in this monster of a game and to be honest I doubt very much if I will ever play it as intended. Whilst the figures in this will not win any prizes for detail they are suitably generic looking to be usable for a whole variety of things - and that is the plan because by dipping into any of the current plastic figure manufacturers (Hat springs to mind) one can round out the forces available. I actually rather enjoy working with plastic figures  - it takes me back to those Airfix armies of yesteryear - but these days the need to convert figures is not quite as essential as back then, simply due to the choice currently available.

I now have a good selection of board game plastic figures - all of which are around the 20mm size - from Risk: Medieval, Axis and Allies and now the two games above. There are some plans afoot which I will get to at some point but for now having the raw material to hand is the key.

It was really good to meet up with Bob again, albeit briefly, and I am really pleased that he offered these two games to me so I now need to get my thinking cap on!

It was great to see you, and I’m pleased that my games are going to good home.

Hi David -
I have found the 'Age of Imperialism' figures useful for a little 'map game' side line. I don't have the full 'Age of I.' set, just the figures and accessories. Still, the former featured 6 months ago in a brief border clash between Ruberia (RED) and Azuria (BLUE), using one-brain-cell rules I made up.
https://archdukepiccolo.blogspot.com/2020/12/an-indulgence.html
Cheers,
Ion.

You did well there, I have always fancied getting Battle Cry and painting up the supplied figures to play it as supplied. I do have a copy of the rules somewhere and seen a few of the scenarios, they look fun. How many figures in the box?

All the best,
Lee.

I have to say that when I opened the ‘Age of Imperialism’ my creative gene went into overdrive! There is a huge amount of potential with this lot - so much so that I shall be on the lookout for another copy as well as the ACW version!

The figures are quite simple and stylised but the standard infantry figure is suitable for a number of nationalities which is something I shall be looking onto further.

Many, many thanks for making these two games available to me - I am absolutely delighted with them!

That is a cracking idea and no mistake! You will probably not be surprised by the fact that I shall be looking very closely at your idea for a few ‘flights of fancy’ of my own - an email will follow!

I rather like the figures from this game as they are quite basic and stylised and are also wonderfully generic looking. My plan is to dip into some of the commercially available sets. From people such as Hat for specific types whilst using the standard infantryman as the rank and file element. There are moves afoot so watch this space!

This translates to 3 x mounted generals (there is a foot figure of a gunnery officer with binoculars that could easily be used as a general), 9 x cavalry, 40 x infantry and 3 guns with 3 figure crews.

In game terms there are 3 cavalry units, 10 infantry and 3 artillery batteries plus the commanders.

For me I would look to increase the overall size to 12 cavalry and 60 infantry as I want to use 4 figures cavalry units and 6 figure infantry units.

I was really pleased to get this game and this time will not be letting it go as I have a much deeper level of commitment to the period than previously!

Meeting your chums and getting new toys… a splendid day indeed.
I’m ever so tempted to paint up the contents of my Battle Cry box… I’ve painted my TravelBattle set and it makes a real difference to the gaming experience…

I’m looking forward to seeing what you do with yours…

It was a real pleasure meeting up with Bob and hopefully things will improve so that all of us can meet us again in person.

I have two choices with this - both of which have been influenced by adopting the 6 figure infantry and four figure cavalry unit standard rather than the 4,3 or 2 used in Battle Cry. If I used the Battle Cry figures then I would need to buy another copy - in effect solely for the figures or I could replace the whole lot with 15mms - this was what my plan was with the Spencer Smiths.

The 15mm option is rather appealing as it would certainly be cheaper than buying another copy of the game! I have been looking at Warrior figures for this - they are simple, basic castings that would fit in with my painting technique.

No decisions as yet but I suspect you can see where my thoughts are going!