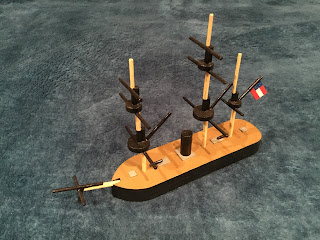 A Confederate commerce raider searching for her next prey.

Now that I have cut my 3 x 3 teeth so to speak, I have taken the opportunity to reflect on the Duel of the Ironclads and how it played out. I am not talking about the rules - more on this later - but the overall ‘flavour’ of the action and how this equates to what we know (or what we think we know) of the chosen period.

It is safe to say that these rules are best used for small scale, up close and personal actions - think Gregory Peck in Hornblower or Russell Crowe in Master and Commander (earlier period I know BUT it does show you where my thoughts have been wandering….) - which is ideal for the naval bolt on to a land campaign or for low level naval operations - hunt the raider type operations for example.

In the 3 x 3 world having a maximum combat range of 3 squares appears about right  and this is a third of the distance I use for the parent rules. There is no range differential between smoothbores and rifles although the latter have an advantage in respect of penetration. I am adding range modifiers to the firing process in that targets at range 1 add a +1 to each firing dice whilst at range 3 1 is deducted. I have also added to the ‘rule of 6’. As it stands a roll of a natural 6 always scores 1 point of damage and in addition entitles the firer to roll a further d6. Where firing scores after modifiers exceed 6 the target receives 2 points of damage. I am happy with this and so will stick with it and furthermore have also added in the ‘rule of 1’. Essentially a natural roll of a 1 is always a miss, regardless of modifiers.

I am satisfied that the ‘gun factor/penetration factor/armour factor’ works well so this can be left as is. Firing arcs need simplifying but that is no great drama and in fact will do me a favour as the original version was a little cumbersome to use.

Movement speeds initially caused me a few headaches but by adopting a ‘1 square equals approx. 6 knots’ scale it fits in well with speeds of 1 to 3 working well enough. Turning usually costs a movement point although I am allowing highly manoeuvrable types to have one free turn whilst poor types have to move 1 space before they can change direction.

The whole critical hit/critical point section needs clarifying and revising but again, this is largely simplifying what is already in place.

Once the above additions have been incorporated into the rules, along with the updated ship specs, I will run a further action just to see how it works out.

I really enjoyed the first run out of the rules as tweaked for the 3 x 3 format and as mentioned I think there is a lot of potential for certain types of action. Clearly they are not designed for fleet level engagements but for low level encounters they work really well. As mentioned previously - and after much pondering - I am definitely going to be tackling some late 19th century gunboats for use on Madasahatta….

There is also the prospect of age of sail as well….

First things first though - I need to tidy up the rules and pimp the playing area.

Hi David -
In my own naval battles, I have 'scrolled the table' to accommodate the movement of vessels along some sort of axis. I was wondering if you do the same with the 3x3. If not, there are still plenty of actions within confined waters that are quite playable under this system, e.g. the attacks upon CSS Arkansas as it lay up close under the Vicksburg shore of the Mississippi, or the sortie by three CSN ironclads down the James River in January 1865.
Cheers,
Ion

I have been pondering a ‘scrolling table’ type effect which would be eminently useful for river style actions or for things such as stern chases. I am certainly going to experiment with these ideas but for now I want to hone the base system. Work is underway on finishing the rules and furnishing a better playing surface, not to mention building some more ACW ships.

Brings to mind frigate duels and Star Trek type ship to ship combats. It might also work for subs vs destroyers battle of the Atlantic type games.

All coming along very nicely. Are you including shore batteries in the rules?

Another option I am thinking about are air attacks on ships. The target could be deployed in the centre with the spaces around being used for the CAP and the attackers. Submarines are also something I have been thinking about.

I certainly will be!

Re aircraft and subs - One jump at a time - Ironclad rules first!!

Have no fear - the ACW stuff is what will be finished off first of all. In doing so I will covering the period from 1861 to around 1885 although I reckon the basic system could be extended beyond that but that will be an idea for another day methinks!