A Wargaming Smorgasbord of Sorts 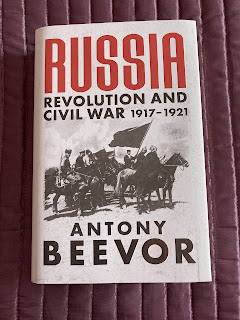 A period of global impact - not one I am hugely familiar with but needless to say there is cunning plan of sorts…. 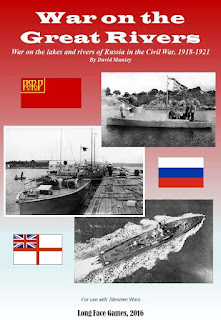 ….and it may be something like this! Available from the Wargames Vault, David Manley’s supplement covering the Russian Civil war to go with his excellent Steamer Wars rules.

Saturday morning saw the arrival of the second part of my Father’s Day haul - the latest book from the renowned military historian, Antony Beevor (see the first picture). I must confess to having a very limited knowledge of this particular period but hope that this book will fill that gap or at the very least give me a nudge along yet another project….

I know of several good rule sets that cover this period as well as figure ranges so who knows? I may have a Portable Wargame sized dabble at some point.

Laurel and I had an impromptu day out to the Promenade Park in Maldon for the Armed Forces Day. I took a few pictures and picked up a dash of sunburn as well fed some very enthusiastic ducks! The picnic with friends was great fun and it was nice to get out for the day. A selection of the items on display are below: 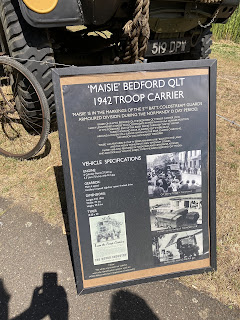 A wise wargamer once said “you can never have too many trucks!” 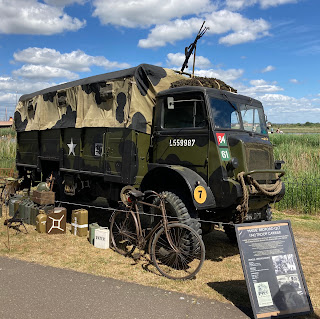 Lovely looking and with a Bren mounted 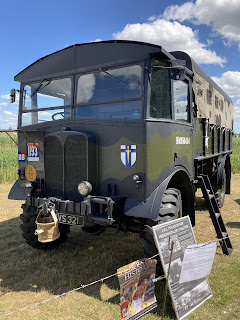 I always remember the Matador from the Airfix kit with a 5.5” gun 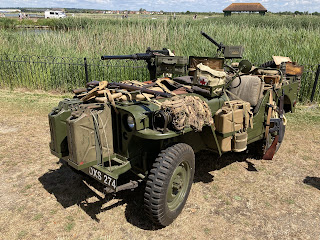 I was rather taken by this heavily armed jeep - just the thing for securing a parking space! 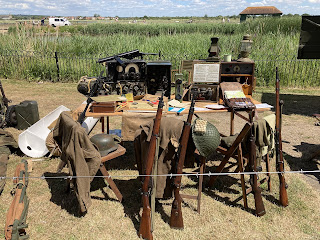 The first in a selection of display pieces 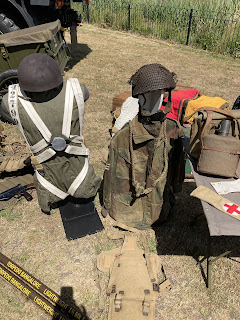 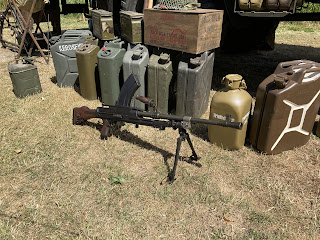 There were rather a lot of jeeps in evidence but the armed version caught my eye for sure - sporting weapons galore!

Sadly time was against me in respect of any progress with the Portable Charge! Wargame but I was able to spend some time earlier this evening messing about with turrets in advance of the great pre dreadnought model build. The first examples are based on a circular design typical of early turrets - for example on the U.S.S. Monitor. The model for this style of turret was originally designed to use standard bamboo skewers for the gun barrels - for smaller calibres, say 6” or smaller, I will use cocktail sticks. Ironically the turret you see in the picture below is actually the first I have built that features gun barrels - all the ACW and Russo Turkish types merely have the gun ports. Given that the weapons were muzzle loaded I merely assumed that the guns were inboard being loaded! 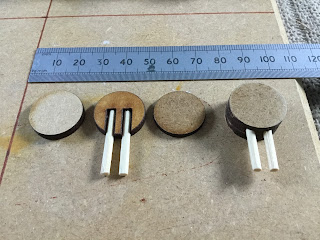 Examples of large calibre main gun turrets - these are 20mm across with the bottom ‘slice’ 3mm thick as is the middle ‘notched slice’ whilst the turret roof is 2mm thick. The gun barrels are a little on the thick side but not overly so and besides, they fit in well with the overall simplistic building style I will be using.

I have looked at many turret styles and it would be easy enough to reflect national differences but that kind of flies in the face of what I want to do. I have a design for a more ‘modern’ looking turret in hand and have decided that I will stick with the above circular type and the new version for simplicity.

I built the above just to see how it would work out and more importantly, how it would look on one of my standard large hull templates. The answer is fine!

All in all then, it was a rewarding weekend although not quite in the way I had planned it and so hopefully next weekend I will be able to catch up!

That’s a great couple of books … and the trip to Maldon looks like it was a great day out. Add the excellent turrets you’ve built, and you’ve had a great weekend.

I’m off grid for a few days to celebrate Sue’s birthday, but I hope that Henry’s book will arrive in the next couple of days. It will give you something else to blog about!

I am trying to resist that Russian Civil War book .. I would spiral into a 15mm collection if I read it methinks

It has been a good weekend all said and done and certainly a busy one! I had a copy of David Manley’s War on the great Rivers for a while now but very little information about the Russian Civil War so hopefully Mr Beevor’s book will help.

I hope you both enjoy Sue’s birthday celebrations (please extend my best wishes to her) and I will let you know when Henry’s book has landed - once again many thanks!

The turret worked out better than I imagined - it did make me smile at the thought though that this was actually the first ‘proper’ turret I had built despite having the pieces for the best part of two years!

All the best and enjoy the next few days,

Having the naval rules gave me the thinnest of excuses for wanting a copy and Father’s Day arrived in a very timely fashion to realise the idea! At this stage thoughts of figures are quite a way away but certainly and perhaps unsurprisingly, the naval dimension is a little closer to home….

Thank you old chap. It was very much a proof of concept type experiment but it came out well enough for what I envisage using them for. Now for the other turrets design and also some smaller versions - as well as shielded gun types.

I'm currently reading Orlando Fige's superb book on the Russian Revolution, 'A People's Tragedy', which covers from 1891-1924, so try and understand the whole period leading up to and including the Civil War. Highly recommended if you want to try and understand the Russian character as well as why the Revolution happened in the first place. I'm only about a third of the way through the tome, but it is heart breaking to see so many opportunities that were lost where simple changes would more than likely have prevented it happening in the first place.

Great day out and the turret is most effective. A friend recommended the RCW book and I have been trying to resist it in Tesco’s when shopping.

Am interested in the RCW book as well - but I have a backlog of books at the moment .

I will keep a weather eye open for that as whilst enjoying Beevor’s book (if enjoying is the right word!) it does go straight in to the revolution so some knowledge around the lead up would be helpful. This far the Tsar is not coming out of it particularly well and as for the Tsarina….

I was surprised to learn that Sainsburys are selling it for £15 - mine was £19 from Amazon, courtesy of my Father’s Day gift card!

The day out was very pleasant and Maldon is a nice place to visit.

I am pleased with the turret - it only took me nearly two years to make a ‘proper’ version!

“But I have a backlog at the moment” - Hmmm, that is relatable although I suspect I am not as disciplined as you in this regards! (Says he, looking guiltily at the groaning weight of unread books on the shelf….)

All the best and pull the trigger - you know you want to!

The day was good fun and the setting along Maldon promenade was set against a backdrop of the river with a myriad number of Thames sailing barges and similar.

An iconic kit for sure, along with the 88mm and Tractor although the German interleaved road wheels always caused me some ‘fingers covered in glue’ moments! Great fun though.