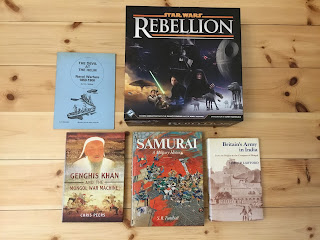 The Haul. The rules courtesy of Mr Fox (many thanks old chap, much appreciated), Star Wars Rebellion courtesy of Raymondo and the three books from Dave Lanchester

Yesterday saw yours truly heading south into Kent (always a pleasure) to the wilds of Gillingham for Broadside, the show organised by the Milton Hundreds Wargames club. As both my son and daughter were at home for the day it meant that I could go out without worries which was a welcome treat.

I arrived at around 10:30 and immediately made my way to David Lanchester’s military book stall to say hello to him and his wide, Lynne. As is normal for me I has volunteered to help him clear away at the end of the day and also to transact some book related business. In a nutshell a lot more went his way than mine!

On the subject of transactions I has a small matter to attend to with the legend that is Ray Rousell - this was a long planned arrangement and successfully concluded on the day.

It was curious show in many ways - the trade was around the outside of the hall, the games formed an inner ring and the centre was dominated by the flea market. There was some really attractive games to see and as is usual I managed to get a few pictures as follows. 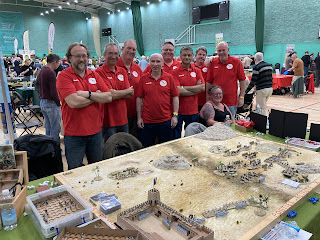 Postie’s Rejects with their Beau Hunks game (organised by Big Lee) that won best of show. A lovely looking game using Blue Moon Foreign Legion figures and scratch built terrain. The rules were The Men Who Would be Kings but there was sub game involving Laurel and Hardy as well. 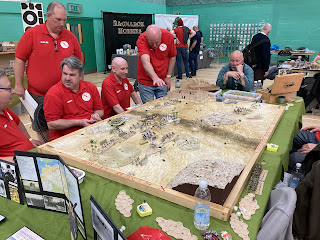 Big Lee overseeing the proceedings - and there was cake, lots of cake…. 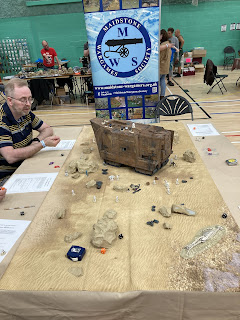 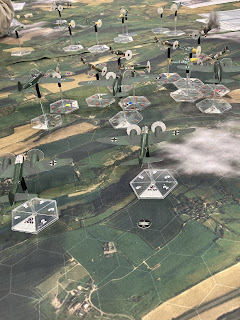 SEEMS took to the skies over southern England in 1940 with this Angels 20 derived Battle of Britain game overseen by Neil Fox (who very kindly donated a copy of the Devil at the Helm ironclad rules mentioned in a previous post. 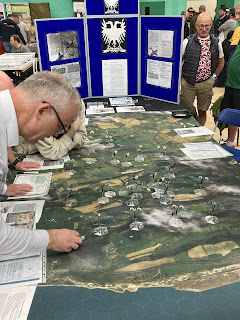 More of the same but this time with the channel featuring! 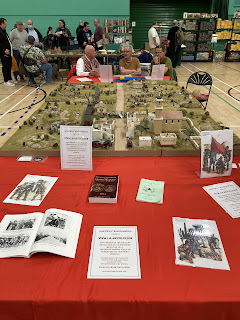 Skirmish Wargames with a 28mm Mexican Revolution game
The three books I acquired are very much gap fillers in my collection. The Samurai title is in support of my self contained Command and Colours: Samurai Battles game - self contained in that the likelihood of me ever painting figures for it ranges from slim to nonexistent. The same applies to the British Army in India title - I have a fondness for the Seven Years War in India and America - in that whilst I would love to game both (I have gamed the French and Indian using my block armies) the likelihood of me painting figures for either is remote. The final title about the Mongols is something I would rather fancy painting up for Lion Rampant or similar at some point but it is a while away yet.
Star Wars Rebellion needs little introduction. The original trilogy of films is the backdrop for this strategic campaign game featuring all the usual suspects - Luke, Leia, Han and Chewie, Lando, the Emperor and of course the big bad Darth Vader himself. There are a lot of miniatures in the game from two versions of the Death Star - one built and one being built - down to Imperial stormtroopers and many of these would be quite usable in there own right.
Devil at the helm I have mentioned previously and once again my thanks to Mr Fox for his generosity.
Octagons

An Octagonal battlefield
One of the stands I visited featured a new boardgame that will be coming to kickstarter in August. The game is called Iron Thunder by Chiswick games and the subject matter is an abstract WW2 themed semi strategic level offering. It looked intriguing but what really caught my eye was that the board uses octagons for movement. 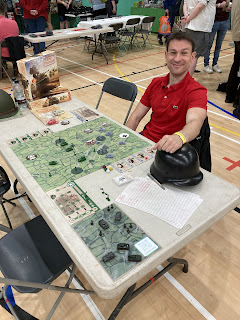 The designer looking very pleased with himself - as well he should as the game looks a lot of fun! 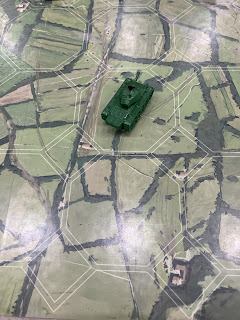 A close up of the Octagons in use (with apologies for the light flare)
I was then hit by a lightbulb moment.
It is no secret that I have been really struggling to get firing arcs and diagonal measuring sorted out for my ironclad rules. The problem with the former was that you needed both orthogonal and diagonal arcs. With the latter it was avoiding the lateral distortion when moving/measuring diagonally against orthogonally. Well, and this is where my thoughts are now, why not use an octagonal grid? For sure it would mean some challenges marking out a playing surface but nothing that a little care could not solve.
What about the squares in the gaps? I hear you say. Simple, and this is the best bit of all. By allowing the corner squares to only be used for diagonal movement a ship would simply enter it at a cost of one movement point. Firing arcs off of this square would be the same as normal as the arcs would be drawn based on squares. It sounds more complex than it is in reality but I reckon it would work well for what I want.
First order of business then will be to organise a playing surface with Octagons and the I will need to change certain elements of the rules.
In closing
It was a great day out and despite the size of the haul I barely spent anything - which made it even better! (Yes I know the items I exchanged had to have been purchased originally so technically it was not a cheap day out!)
Once again my congratulations to the Rejects and thanks to Mr Fox, Raymondo and David Lanchester - and I hope that Mr Lanchester has changed the wheel on his trolley!

Nice report. Do you happen to recall what rules were being used for the Mexican game?

I do not know the name of the rules but knowing Skirmish Wargames I would not be surprised if they were using their own. I was a little surprised to see this in 28mm as usually they game in 54mm. It looked temptingly good though!

They were a version of Krush the Kaiser, Simon.

I'm glad you had a good day out and could relax, with Lauren in the safe hands of your children, which was nice for you. Certainly the show looked good with a nice set of games on show.

You seem to have had a great time. I only wish that I had been well enough to drive, but I’ve been told to take things easy for a few weeks.

The Rejects game looks very impressive, and knowing them, it will have lived up to one’s expectations. Big Lee and Co. do a great job and set an example of how to. Set up and run a participation game, and deserved to win that award.

The octagon concept looks interesting, and I look forward to hearing more about how it works.

Plenty of news in this posting! But what caight my eye was the thing about octagons.

The type of octagon-square tessellation game board has crossed my mind before now, really as 'visual' method of determining movement allowances instead of using mental arithmetic. What I had in mind that all movement INTO an octagon cost (say) TWO movement points. All movement INTO a square cost ONE movement point. You could measure ranges in exactly the same way.

Here's another article I wrote on measuring ranges on square grids. In my view the oct/square grid system would make the thing a deal easier. You wouldn't need a 'ready reckoner'. However it won't solve the problem in which you have very short movement allowances and/or shooting ranges - say, one or two grid areas only.
Cheers,
Ion

I was there, sorry I didn't run into you! Looks like you had a good day, as did I.
Interested to see how the octagons work out!

I've always wondered how octagons would work. Thanks for showing us how.

Aha! I knew my accidental octagons were ahead of their time
https://manoftinblog.wordpress.com/2021/02/12/octagons-are-not-hexagons-or-my-diy-games-workshop-lost-patrol-tiles/

Many thanks old chap - I remember those rules from Skirmish some years back.

Cheers old chap! It was a lovely day out and knowing that Laurel was in good hands made it even better. There were some very attractive looking games and of course it was great to catch up with people again.

Given the state of some of the roads on the route my sat Nav took it was probably just as well you stayed at home! The Foreign Legion game was excellent looking and as ever the Rejects did a great job. All the games looked good and all had something unique to offer. I must admit to being taken by the SEEMS Battle of Britain game (probably biased!) but there was a great looking Lawrence of Arabia game as well.

Early stages with Octagons but indications are that they will solve a number of issues - and will probably throw up a few more!

Many thanks for your comments and I will take a look at the blog post for some insight. I have some preliminary ideas to play around with and at this stage it would seem that the pros definitely outweigh the cons - which means that something will come along to banjax the whole idea!

It has certainly given me much to think about though!

Hello there Mark, Man of Tin,

I read your blog post which has given me a few extra ideas to play around with! I remember that game from GW - gosh how many years ago was that!

I hope the retail Gods were kind to you! It was a very pleasant day out for sure.

I need to try a few ideas out first of all but the concept is certainly viable. I will post on my progress!