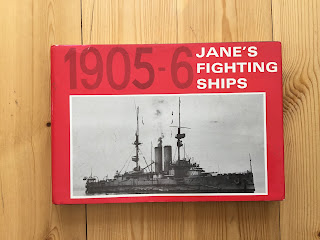 Jane’s 05-06 edition - including some details around the Russo-Japanese War as well rules for F.T. Jane’s Naval Wargame. In very good condition and a mere £10.

The last week has not really gone how I expected it to - not necessarily in a bad way, just different! I was looking forward to fighting a game this weekend but it never happened although the alternative is potentially rather handy - more of which later.

Laurel continues to improve albeit slowly. Her physio came to the house for another initial assessment - this is the fifth physio she has seen -  and he was  hugely encouraged by what she is able to do - Laurel is anything but impressed at this stage though and frustration is her constant companion. She is now just waiting on a further enhanced MRI scan which will hopefully highlight what is happening where and when. As ever, small steps are the way.

Dropping through the letterbox today with a resounding thud is the title you see above. I have no words to describe how pleased I am to get this and so expect a whole raft of pre dreadnought ideas to flying out into the ether as a result! Of course the great thing about this edition, apart from the wonderful amount of detail, is the inclusion of some information about the Russo Japanese War as well revised rules for F.T. Jane’s Naval Wargame. I am really going to enjoy revisiting this old and dear friend!

In other news I have had an interview for another position within the company I am working for. This is officially a fully remote role rather than the one I am currently in with the ongoing 3 month reviews as to whether it not I need to be in the office. I will know by the end of the week if I am successful but the key thing is that I get it the I will not have to worry about being needed in town which is of course essential at present.

I will naturally post as soon as I know what is happening but in the meantime I shall be thinking about ships and how to build them….

Good luck with the job. My small French pre dreadnought fleet is now on its way from TD but im still agonising about finding balanced (ish) opponents for it… Chinese and Italian are currently being considered!

It sounds as if a lot of things are beginning to move in a more positive direction. The acquisition of that reprint will really enhance your naval wargaming bookshelf (I know; I have had a copy for years!), and things on the job front are looking good.

Laurel must really be feeling fed up although it sounds as if her progress is slowly moving in the right direction. The NHS is a great organisation, but at times dealing with it can be very frustrating. For example, this morning I had a visit from the District Nurse to replace my catheter … and I had to tell her that it was removed after my operation two weeks ago. The hospital had told my GP … but he hadn’t passed this information on to the District Nurses. Her time (and much needed money) was wasted due to inefficiency by one part of the organisation.

Good luck with the job,

I have a copy of that edition as well, although I paid somewhat more for it. I plan on referencing it for ideas for building a pre dreadnaught fleet using clothespins.

Really sorry old chap - I was supposed to have sent you a list with some ideas but it went right out of my head! Tell you what, if you tell me what French you are getting I will take a look at the Italians for you. Chinese would be good fun but I suspect they may be a little early for your French.

It certainly was! Needless to say a number of ideas have arisen….

If I am honest I always preferred Jane’s to Conway’s as the latter tends to be a little on the dry side for my taste although to be fair it is difficult to avoid this in what is after al primarily a technical reference book! I also found it frustrating having to negotiate multiple volumes when following particular classes of ships - allowing for rebuilds, modernisation etc but that is just me I guess.

I agree wholeheartedly with your comments about the NHS - an example we are dealing with at present is that Laurel needed to have a blood test before her planned enhanced MRI. The neurosurgical team had said that as soon as she had this then she needed to get the results to them asap so they could book her in. Laurel did this - she even got the GP to email the results to her directly so she could forward them on rather than waiting for them to do so. The email was sent and then nothing. Several phone calls later she finally managed to to get a hold of a member of the team only to be told that the secretary she had contacted was holiday and so nothing would be happening until her return - she was away for two weeks! Needless to say Laurel was far from impressed….

When it is good it is very, very good and when it is bad….

I am thinking that a 1914 edition may be an idea at some point but we will see. Clothespin warships eh? Mine will be MDF constructs when I get to them using a similar technique to that I used for the ACWs. I have a nice selection of clothespins (more commonly called clothes pegs over here) that have earmarked for Sci Fi stuff but lord alone knows when that is likely to happen!

No problemo mi amigo…you have enough going on at the mo. There was a sino french conflict that would have been ripe for ré ignition as a what if campaign but the forces involved on the naval side would have been too one sided for a balanced contest. Austro Hungarian or Italian pre 1901 would probably be better methinks.

You have some old friends there for sure! I was always rather fond of the Jaureguiberry and the D’Entrecasteaux. Good that you have a nice selection of cruisers as the French were keen on them. Let me take a look and I will ping you a line later today. I think that the Italians will give you greater variety and if I may make so bold perhaps another battleship - Bouvet? - and a couple of armoured cruisers would be handy. Was this the fleet pack?

A classic, and an excellent find. Good to hear things are on the up. We must do beers again soon :)

I was dead chuffed to get this and at what seemed like a bargain price! I would not say we have turned a corner as such but we are now standing at the corner! Beers again for sure - I will be up in town next month at some pint, I mean point, and all being well bearing 1:3000th stuff…

All the best and stay cool!