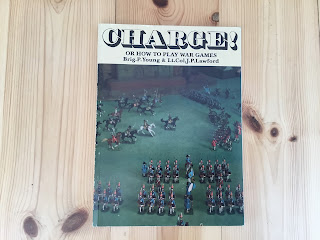 A soft back facsimile edition of the classic book that cautioned us accordingly ‘Let no man set out lightly upon the war-gamers’s path, for it is fraught with perils’

There can be few wargamers of ‘a certain vintage’ that have not read or owned a copy of Charge! Or How To Play Wargames by Brig. P. Young and Lt.Col. J.P. Lawford. Originally published in 1967 I first came across this book in the early 1970s in the local library and I seem to recall having it out on more or less continual loan until I moved to London in 1977! My own personal copy came much later but I can safely say that this book was and indeed remains, one of the most influential titles in my wargames library.

It would be tedious of me to regale readers of the perennial appeal of this book - I am pretty sure there would be little for me to add to what is the almost universal high regard and esteem in which it is held - so I am not going to attempt to. Suffice it to say the good Brigadier and Lieutenant Colonel would probably be harrumphing disapprovingly at what I am planning to undertake. In my defence I would say that the plan is very much a ‘doffing of one’s cap’ in respect of their magnificent work. 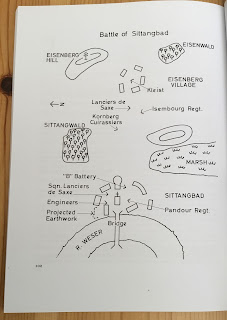 The map and opening positions for the famous Battle of Sittangbad.

My plan is a simple one. I am going to refight the Battle of Sittangbad using the block armies and my 8 x 8 chessboard for the playing area. The rules will be derived from the Portable Napoleonic Wargame Divisional level set and all being well I am hoping to tackle this over the coming weekend.

I have fought this action a number of times in the past including a memorable version using early WW1 28mm French and German figures which was enormous fun. I have never fought this using blocks or a grid so in that sense it will be a first although again, I can picture in my mind’s eye the good Brigadier and Lieutenant Colonel harrumphing mightily at this apparent heresy - “You will not, we suppose, be so lost to all feeling, as to represent your units and formations by counters, blocks of wood or cards.” Hmm, that ship has sailed methinks….

Opening thoughts on making it so

The first order of business will be to translate the battlefield into an 8 x 8 grid and then think about the required terrain. I will also need some way of identifying the individual units and of course to draw up a roster for recording hits etc. Given that the original rules made use of units formed of companies and squadrons it is actually quite straightforward converting these into blocks based formations.

For example, an infantry regiment from the battle itself consisted of four companies - two centre, one grenadier and one light. In my block based world that very handily converts into a regiment of four individual blocks which coincidentally is a typical strength point total for a unit of foot. Similarly, cavalry had three squadrons and artillery two guns. As you can see then, the usual 4, 3 and 2 strength point system works rather nicely.

I am thinking about using a d6 per subunit for combat purposes - mainly because for me one of the great things about the original rules was using volley fire - a full strength 48 figure line infantry regiment would roll 1d6 per 8 figures so rolling 6d6 for a full regimental volley (especially at close range) was so satisfying - as long as you rolled high enough that is!

The order of battle for the opposing sides looked something like this:

Some of the units are shown on the map above in their starting positions - the challenge is going to be accommodating them all and the terrain.

Thoughts on the rules

As mentioned I want to experiment with combat at a sub unit level. In practise this would rolling a d6 per block rather than the whole unit. At the moment I am keen to use a roster system for recording hits and perhaps having exhaustion levels per unit and with an overall army level score. I need to think about this further though so if anyone has any ideas let me know!

This particular battle is a perennial favourite of mine, not only due to the wonderful spectacle it provided (even if the pictures were in black and white) but also the tremendous account of the action that followed. I also hugely enjoyed the whole imagi-nation set up of the thing. Regular readers of the blog will no doubt recall my long abandoned Spencer Smith ACW set up which was organised as per the units in the book. I have often thought about tackling an imagi-nation set up based around the third quarter of the 18th century (along with many others!) using Spencer Smiths but to be honest it is not something I will be attempting anytime soon. Who knows? Perhaps it would make a great retirement project.

This is a little distraction from the ACW naval set up to be sure but it is a welcome one. The ACW rules are very close to having what I hope will be the final draft ready and of course, the remaining ships are STILL on the modelling table….

Funnily enough I was flicking through Bob's books last night whilst enjoying the late evening in the garden (a rare occurence in England!), when I saw that he had done a hexed version of Sittingbad in Developing the Portable Wargame on p113. So when I read this it made me smile.

All of these classic scenarios one really should try and get onto the table at some point, but like so many things, they tend to be forgotten about, which is a shame. I have played some with friends, not all of them successfully translating to modern rulesets it must be said.

Still, fingers crossed you get to play this this weekend and I am certainly hoping that oyu do!

Sounds like a great idea. I'm looking forward to seeing the game. For hits on your block units, perhaps a small d6 placed near or on top of the unit to represent its current strength points? I've used this method in the past with units mounted on fixed bases using small green dice.

Interesting stuff David. I am keen to see where the idea of EPs for units goes.

The Battle of Sittangbad as a scenario works well for just about anything really - the WW1 version I fought was huge fun and as I recall we even included machine guns! Bob used it very successfully in DPW as you rightly say.

It will make for a fun diversion although needing rather more set up work than I originally thought. I am looking forward to trying out combat at a sub unit level - actually individual blocks - as I believe this will better reflect the action. Still thinking about that one though.

That is a good idea for sure but I have something a little simpler in mind - all will be revealed in due course!

I am looking forward to fighting the action although as mentioned, there is rather more work involved in the set up than I originally envisioned.

I wanted to try out EPs for units as a kind of simple morale mechanism. The morale rules in Charge are very simple - basically a unit functions normally until it suffers 50% casualties when it must leave the field. If I allow two hits per block then a four block unit must retire after four hits - I have not settled on this but that is where my thinking is currently at. I will give it some thought and will report back.

It should be fun though.

David -
'Charge!' was the very first war games book I ever owned. I still have that copy, though the dust cover has long since shredded itself to nothingness. I do like the red hard covers, though.

I have played the Sittangbad battle a couple of times - once about 30 years ago as an 18th century action, the second time as a WW2 Portable wargame about 5 years ago. Here is how the latter action unfolded:
http://archdukepiccolo.blogspot.com/2017/10/sittangbad-revisited.html

Thanks for the reminder...
Cheers,
Ion

I would like to get a hardback version - preferably with the dust cover, I am a little sniffy about these things - but this would be a very expensive undertaking!

Many thanks for the link which I shall certainly take a look at. A WW2 game based on the battle would be appropriate given the inspiration for the original version!

It is one of those wargames that has passed into legend in many ways and I am sure that as long as gamers are fighting battles then it will certainly feature again.