Warships in Plastic for a Change 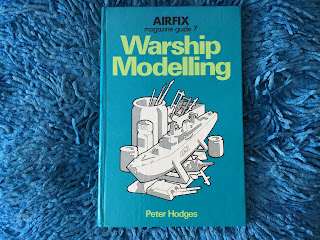 Airfix Magazine Guide Number 7
My attempts at 1:600th scale ship modelling have never been hugely successful and I can count on one hand the number of such models I have built over the years! That being said, I am a sucker for reading about detailed ship modelling and for sure there is always something one can takeaway and incorporate in one’s own efforts.
The Airfix Magazine Guide series of books needs little introduction from me and for gamers of a certain vintage they bring back many memories. In my case Bruce Quarrie’s Napoleonic Wargaming - the orange covered edition - was my first introduction into gaming beyond Charge and the Wargame. It inspired an Airfix 1815 Alied army and many games large and small when I was a teenager on the Isle of Sheppey back in the early 1970s.
The book you see above is not one I have owned and it came to me courtesy of that very nice chap David in Suffolk.
David and I (there seems to be a lot of Davids in our hobby - I know of at least 6!) have something of a shared history in that we are both from similar parts of the world and remember both of the model shops that used to be in Sittingbourne, Kent (his memory of this being rather better than mine!). Anyways, the book is a cracking little title and whilst I may not be rushing off to build anything full hulled and 1:600th scale there are a number of plastic 1:1200th scale model kits I have that would benefit from some of the tips contained within its pages. It would have certainly been very handy to have during the great shipbuilding program occasioned by Eric Knowles WW1 naval campaign all those years ago. David of course is now the owner of a few of Eric’s Seven Years war models so there is a kind of circularity in all this!
Given that MDF seems to be my usual material for ship building these days one could be forgiven for thinking that this book would be of limited value to me but not so. I have a few plastic ideas to play around with so I am confident it will be a handy title to dip into - there are certainly some very useful conversion and detailing techniques mentioned, all good stuff.
I am really pleased to have a copy of this book and so many, many thanks to David once again for passing this on and yes, (as per his note) I will be sure to lend it to Bob Cordery in due course!
Posted by David Crook at 12:17

Classic book .. never had it but would love it :)
Well done

I was looking at my lawn and thinking 1:600th scale Fletcher Pratt - then I woke up….

Lots of tips and hints are contained therein which is all good stuff.

Definitely a classic - as are much of this series anyway.

Cheers David, glad you like the book and thanks for your nice comments!
It will be interesting to see how it influences your ship-building...

Thank you old chap! There is a lot of ‘fiddly bit’ ideas that would be useful in any medium but for sure the 1”1200th kits I have would definitely benefit from this book.

I may have to see about rebuilding my collection of these books - they are very useful indeed!

All th e best and thanks once again,

All the best Aly

I did wonder if anyone had thought about a reprint but guess that given the names involved it would be a nightmare to organise the appropriate permissions etc.

They are a great showcase of the era in many ways and certainly helped many a gamer or modeller over the years.