A Tale of the Samurai 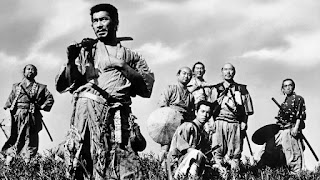 My first real involvement with anything Samurai related came about via a role playing game called Bushido published by Fantasy Games Unlimited (and still available) in the early 1980s (possibly late 1970s). The Newham Wargames Club took it enthusiastically - Mr Fox still has some of his painted 28mmNaismith figures from the period - and when Dixon Miniatures launched their range it seemed like a golden age was upon us. One of the big highlights of the time was a visit to the National Film Theatre in London’s West End to watch Akira Kurosawa’s epic of the Seven Samurai. Eric Knowles and his son Bill (Bill was the game master for the Bushido campaign in which yours truly featured as a warrior peasant….) were in attendance along several other luminaries of the old Newham Wargames Club. The film was hugely inspirational and is one of my perennial favourites.

Anyways, the years rolled on and here we are now in 2022 with the Samurai itch still in evidence although about to be scratched in a number of ways! 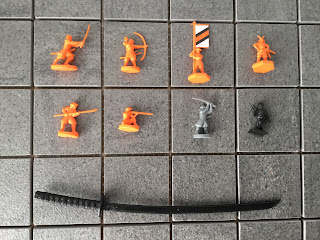 The figures from Shogun…. 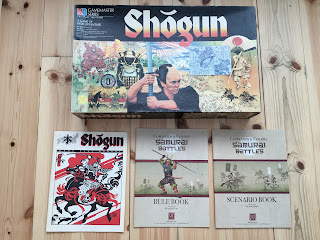 ….and the massive box they live in. Note the rules and scenario book from…. 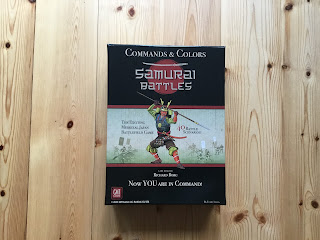 To begin with I have a copy of Command and Colours: Samurai Battles which is fully labelled and with the terrain tiles and counters carefully punched and trimmed. I also have my recently acquired copy of Shogun - the large, Risk style strategic level game that includes some 400 plus 1:72nd scale hard plastic figures that are fully compatible with some of the available sets - notably cavalry (missing from the game), command and even artillery if you wished. This was going to be my preferred choice for army level style games - using the figures from Shogun along with the Command and Colours rules or possibly something Portable Wargame or DBA based.

There is another option to explore and one that will present a real challenge but at the scale I am thinking it should work out reasonably well.

A few years ago a Samurai skirmish game called Test of Honour was released by Warlord Games (now with Grey for Now Games) that included all you needed to set up small scale skirmishes during the era of the Samurai. The game was designed for around 20 figures or so which is fine but I wanted something a little larger. Anyways, I acquired a copy of the starter set and some of the additional figure packs (no metals) but for one reason or another it never really got off the ground. I remember being less than enthusiastic about the rules (not sure why though) and so the entire collection of the plastics were donated to Mr Fox. They are still lurking in his loft and following a brief exchange of emails and a quick chat last night the whole shebang will be winging its way back to me.

What on earth am I thinking of? Two scales of Samurai? Am I mad? I suspect the answer to all three would be something like: not sure/yes/probably….

I rather like the idea of using the larger figures for man to man skirmishes but also for Lion Rampant sized actions. The smaller figures will of course be used for battles. So, I am now looking at not one but possibly four Samurai themed projects - large battles using 20mm, man to man and larger skirmishes using 28mm and the Boshin/Satsuma Rebellion in 20mm and also afloat.

I think I need a lie down, pass me a futon please whilst I compose a Haiku and look at the cherry blossom…

Time to lie down indeed! The film is an absolute classic and love to watch it, but these days in bits due to its length. Off to watch a bit of Lawrence of Arabia that is apparently on Netflic now: another classic with my favourite bit the arrival of Omar Sharif's character. Sheer movie magic!

I can see why this project has such an attraction for you. It looks as if you have got all the bases covered with just a couple of strategic purchases.

I do have one question. How similar are the C&C Samurai Battle rules to the rules in Zvezda’s Art of Tactic Samurai Battles? They are from the same author and I can’t believe that he would have written two completely different sets of rules for the same period.

Lawrence of Arabia eh? One of my all time top ten films for sure and the arrival of Omar Sharif was a classic piece of filming. I was quite taken with Antony Quinn as Auda Abu Tayi.

Either way both films need an intermission!

If anyone had said to me back in January that this is where I would be in September in respect of all things Samurai I would probably have laughed it off! It does all seem to have come together in synchronistic kind of way….

I believe that the rules are pretty much the same but that the Command and Colours version with the blocks polishes up a few things. I will take a look on BoardGameGeek to see if there is anything there about the differences. I do know that there are some differences in respect of the scenarios but again, I would have to check what they are. The figures from Art of Tactic: Samurai Battles are fully compatible with those of Shogun so would be a good source for stuff I could use for the army level style games.

You are quite right about the value of strategic purchases!

The early incarnation of the Rejects loved playing Shogun, great to see it getting an outing.

David -
If you have not seen it yet, I recommend the Japanese movie 'Kagemusha'. It is about the use of a lookalike (kagemusha) to cover up the death of Takeda Shingen. The impersonator himself is the central character, whose personal process of redemption(?) runs against the background of the warfare that led to the cataclysmic (for Clan Takeda) battle of Takatenjin.

I believe Zvezda produces a boxed set 'Samurai Battles' that includes both 'AoT' and 'C&C' game systems along with several figures and accessories. Check this out
https://boardgamegeek.com/boardgame/122913/samurai-battles
Tell you what, it's a terrible strain upon my resistance to temptation!

Another of Kurosawa's films that would be inspirational for Samurai battles is Ran. I can't recommend it highly enough. It looks as though you have acquired all the necessary raw materials, I'm very interested in what you come up with.

I had visions of the rejects sitting on the ground around a low table whilst cross legged, wearing kimonos, sipping cha or sake and looking inscrutable.

I have played Shogun but not for years - it is a great game for sure.

I have seen Kagemusha and what a great film! As I recall George Lucas had some involvement in the film as he was a huge admirer of Kurosawa (and he kind of ‘borrowed’ a few of his ideas for Star Wars).

I have been trying to get a digital copy of the film but so far no luck.

I would be interested in seeing the combined version version of C and C - certainly the figures would be useful - so I may keep a weather eye open for it.

I am pleased that I am not the only one under the strain of temptation….!

Ran is on my ‘to watch’ list and I have read many great reviews of the film. I think I am quite close to having most of the bits and pieces I need so once the last of the ACW kit has been completed I can sit down and see what comes first!

That is great going! I am trying to resist the temptation to tackle the Sekigahara scenarios first but would ideally like to work up to them - at least that is what the sensible half of me is saying….

I like this project including the crossover of scales, you can’t really do Samurai actions without having the option of some small scale skirmishes. I shall watch this project closely.

I never really set out to do it this way but it does make sense to do so - even if it means having everything assembled at once! The original plan was to look at the larger actions as a tie in with Shogun and Command and Colours: Samurai Battles. Reacquiring the Test of Honour kit adds a further dimension and certainly man to man skirmishes or Rampant sized affairs would be a lot of fun. Then of course there is the Boshin/Satsuma Rebellions with the added bonus of a naval dimension of sorts.

In short there is plenty of variety for me!

All I need to do now is crack on with some of it once the ACW is finished with.