Last Lap with the End in Sight 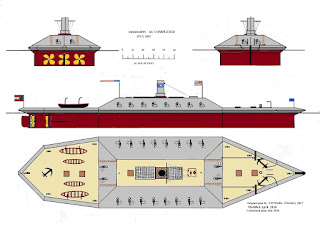 C.S.S. Mississippi - guaranteed to strike fear in the hearts of any Union gunboat in the vicinity. I am building one of these to go with the C.S.S. Louisiana and the C.S.S. Manassas. 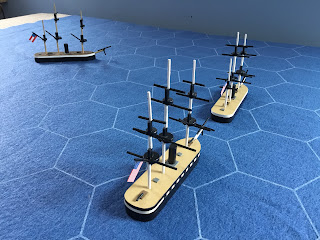 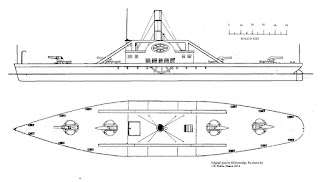 C.S.S. Selma - I am looking forward to making this!

My order from Warbases arrived containing the final pieces for the last of the ACW ships. This means that I shall be knee deep in MDF for the next couple of weeks as I endeavour to bring the collection to a close, ideally by the end of the month so I had better crack on! When I say close I naturally mean that it will be as far as I want to go for the present - no doubt the odd model or two may be added as and when needed in the future. The final collection will number around 75 or so scratch built models which is a pretty good going in my opinion! The rules are entering their final stages and the plan is to have them available in print a little later in the year - certainly in time for Christmas. 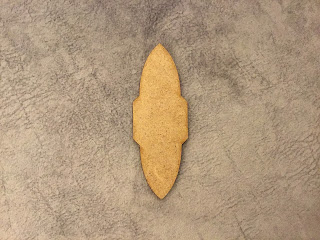 The lower hull for the revised double ender Union gunboats. The deliberate mistake concerns the side sponsons - they should only be on the second layer as these are where the paddles are.

True to form there was a small issue with the order but nothing that a swift exchange of emails couldn’t put to rights. I have more than enough to be getting on with in the meantime as I currently have 11 models in various stages of construction/painting and a further 4 to start from scratch. The pair of double enders with the wrong hull shape will be finished and just rebadged as something else. There was enough variation among converted civilian steamers that it really should not be an issue and besides, the vast majority of the collection is largely ‘based upon’ rather than museum levels of accuracy!

Another thing I will need to do will be to furnish some hexagonal terrain tiles for river banks or coastal areas. I have a birthday coming up so may treat myself to a selection of Hexon terrain pieces or then again may just get some laser cut MDF versions and do my own thing with them.

Right then, head down and get on with it!

It looks like we have a lot of nice ships coming up…hurrah!

I certainly hope so! Seriously though, the final push will see some 16 models completed of which 4 are currently half painted, 8 are under construction and 4 need to be built from scratch.

Looks like I will be rather busy and knee deep in MDF, Bamboo skewers, wooden cocktail sticks and Uhu glue!

It will be worth it in the end though.