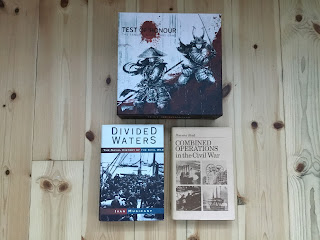 Welcome home! The Test of Honour base game plus a shoebox full of Samurai/Ashigaru sprues and a box of Ashigaru missile troops and two rather useful ACW titles

Yesterday evening I paid a visit to my old friend Mr Fox to collect some bits and pieces and have a catch up. If you recall I had mentioned previously that he was the custodian of a whole pile of Test of Honour 28mm Samurai plastics that had been adorning his loft since I gave them to him a few years back. These are now back with me and so plans can move forward for some man to man skirmish/Lion Rampant style action in due course.

Neil had been a busy chap and time was spent looking over some of his collections and I only wish. Had some pictures as what he showed me was quite simply splendid. The whole Rampant series has really resonated with him and so he showed me his Seven Years War, Napoleonic Peninsula and War of the Roses collection and quite lovely they are as well! I have yet to get a copy of Lion Rampant 2nd edition but for sure it is on my to get list - it is my birthday later this month so a copy features on my Amazon list!

Neil is very generous with his painting and modelling tips and so was happy to take my barrage of questions in a ‘Yoda and Luke’ kind of way - pearls of wisdom that I fully intend using when I get to the painting. 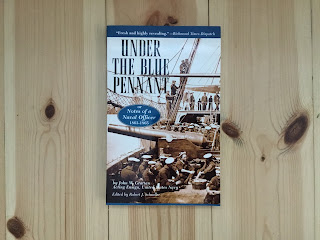 Definitely a new one for me - Acting Ensign John W. Grattan served in the North Atlantic Blockading Squadron between the years 1863 and 1865 and witnessed some of the most significant naval operations of the war. Very useful indeed!

I had some books for him and he for me although he latter was quite impromptu but hugely appreciated. In truth two of the three books coming back my way originally came from my collection when I abandoned the first ACW project some years ago. It was great to have them back on the shelf!

Neil also generously donated to the cause the book you see above which after a cursory flick through looks like it will be a cracking addition to the ACW section of my library.

It was a very pleasant evening all round and my thanks once again to Mr Fox for his generosity and the iced cold one that cane with it!