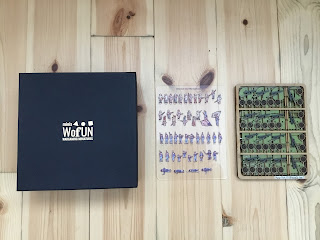 18mm ACW WoFun goodies and the artillery park. The Jacobites will appear in a later post. There are ten sprues of figures in the box and the necessary bases.

Some time ago I flirted briefly with the English Civil War using Wofun figures - the 2D plexiglass wargames figures that have become hugely popular since their original launch. Initially the collection was in 28mm and then 18mm. The larger size collection is now in the hands of Mr Fox and the 18mm are long gone - mainly because I could not get sufficiently ‘into’ the period. The English Civil War is one of those periods of history I feel I should be interested in but has never really taken off for me despite my best intentions. I am a huge fan of WoFun though and believe that hey offer a very good alternative to traditional figures and with the ability to be used straight out of the box.

At the present time (at least up until a week or so ago), I did not have any WoFun in my collection although it was always on the cards in some way in due course. Anyways, thanks to the incredible generosity of my old friend Bob Cordery, I am now the proud owner of an 18mm set for the American Civil War and a 28mm set for the Jacobite Rebellion!

Both of these sets are described as starter armies and are two differing styles. The ACW version features individual figures whilst the Jacobite Rebellion uses the Peter Dennis ‘multiple figures in one strip’ approach. The ECW sets mentioned earlier are both in the Peter Dennis style - anyone that has seen his ‘paper boys’ will be familiar with this - which works well for close order formations. He has also produced for WoFun an ACW set so one has the choice of styles to choose from.

The ACW 18mm figures are lovely and in one fell swoop successfully solve the dilemma of organising armies for the period. There is a great selection of infantry including some Zouaves, cavalry and artillery (16 guns and crews). In short, there is everything I will need for the period and in a scale that works really well for me.

As the ACW figures are individuals there are a number of options for basing I can consider. The bases supplied are designed for 6 foot so having a pair of these forming a unit would be a good shout. Some for the infantry are in firing poses (kneeling and standing) which would work well for skirmishers or even, at a push, dismounted cavalry. I will have a good look at various basing options I have and will see where that takes me. The collection is tailor made for the Portable Wargame and for me it now means that the land side of the naval project has some real substance to it. I had flirted with the idea of some armies made up of Peter Pig 1:600th scale figures but now do not need to.

The Jacobite collection is lovely looking and again, this is a period I have flirted with on and off over the years. There would be no chance of me ever painting figures for this period so having these available is a real boon. I will have to re establish the Jacobite section of my library though - nothing drastic, just a couple of selected titles.

Many, many thanks once again to Bob - I am looking forward to ‘Portable Wargaming’ with them!

Wonderful post and fantastic figures.
what custom duty did you have to pay if any on your order.
I want to buy some 18mm SYW but can't work out what import duties are?

I suspect the original acquisition was pre Brexit so I have no idea of what any charges would be. If you contact WoFun directly they will advise you.

18mm is a great scale for these figures and one of the great advantages is the small table footprint of a base of figures.

It was my pleasure to,pass them on to you. I hope that you get lots of fun from them.

David, the generosity of fellow hobbyists, both in the sharing via gentle blogs and in the physical of gifting 'stuff' is an admirable aspect of the wargame community.

look forward to seeing your ACW WoFun fighting across the table.

Many, many thanks and for sure - there will be lots of fun to be had

You are absolutely right! Bob is a legend in any many ways and it is a privilege to count him as a friend. I am looking forward to getting the ACW stuff ready for the table but for now the ships take precedent.

Wofun figures, especially the Peter Dennis ones look great, I must admit I am sorely tempted by them, one day.....!

WoFun seem to be going from strength to strength with new ranges being added all the time. They use a number of talented artists including Peter Dennis so one is able to pick one’s preferred style readily enough. The ACW collection that Bob passed to me was I believe one of the early designs going back to the original kickstarter. They are absolutely delightful to look at and I will enjoy setting up the units when I get to it - which I am keen to do as soon as the ACW ships and rules are finished.