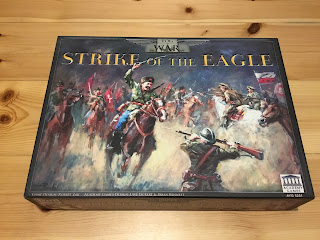 The front of the box…. 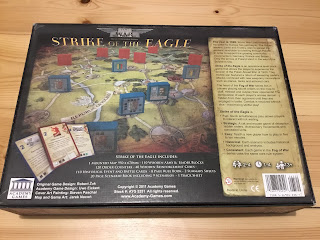 ….and the rear. Note the blocks and the map detail - very useful for the budding Portable Wargamer looking for a readily usable map of the region….

You may recall a while ago I picked up a copy of the above board game which covers the Polish - Soviet War 1919 - 1920. This is a card driven block based game that uses a map that is town to town based rather than using hexes - rather like Columbia Games 1815 game Napoleon. It looks really good fun and is designed for two to four players. Given rather more pressing priorities - ACW ships and the final work for the Portable Ironclads Wargame - the game has sat on the shelf awaiting some attention. At this stage the two card decks - one for the Poles and one for the Soviets - are still in their shrink wrap, the counters are unpunched and the blocks have yet to be labelled. I had also made a mental note to read up on the war in order to add some historical context. There are a couple of Osprey titles covering the war - both of which are on the Christmas list - but I seemed to recall seeing the book below in a branch of Waterstones some years ago and so after a little digging was able to track down a copy via eBay for the princely sum of £4.21 including postage. 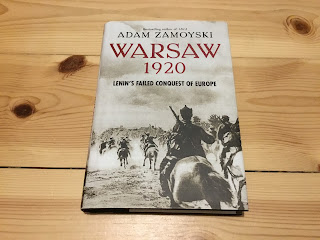 A small A5 sized hardback edition by Adam Zamoyski - I reckon with the brace of Osprey titles currently on my Christmas list and the useful notes on the war contained in the game above I will have pretty much everything I need for a Portable Wargame experience.

One of the ‘long way down the road’ projects I am planning is a late 19th century Colonial style set up using the figures included in the board game War in the Age of Imperialism by Eagle Games. The basic European style infantry figure (of which there are a couple of hundred in the box!) is pretty close to a Zulu War British infantryman in a standing firing pose. I added a box of Hat Industry Zulu War British Infantry Command, together with their very nice Colonial artillery and the inevitable Gatling gun set. Ideally I wanted to get the Hat Industry Unmarried Zulu boxed set containing 60 figures but this is as rare as hen’s teeth at present. The ESCI and also Call to Arms Zulus are nice albeit a little fiddly in terms of assembly. To be honest I kind of parked the idea for the time being as I figured that hopefully when I am ready to pull the trigger they will be more readily available. 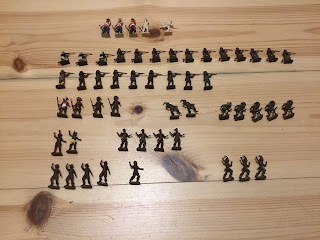 The contents of a most welcome Jiffy bag! Bob mentioned that the shields and spears were missing but that is not too much of a problem and is easily rectified. I was particularly pleased with the number of riflemen included for reasons that will soon become apparent….

Anyways, a chance exchange of emails with the painting machine that is Bob the Old Painter ended up with a small Jiffy bag arriving of some ESCI Zulu War figures to get me started with. I mentioned to him that I had a cunning plan with these and so now can unveil the beginnings of an idea.

The tribal figure included in War in the Age of Imperialism is a splendid looking fellow but there are only 16 of them - hardly enough for a Impi! Well, the plan I am thinking about is to use the above in conjunction with the aforementioned tribal figure to set up an African tribal imagi-nation called tentatively the Mazuti. This is a fusion of the Masai, Zulu and Ashanti types. The army will have fierce warband style warriors backed by skirmishing firearms equipped warriors and some as yet to be organised mounted types. The Mazuti empire will be based in central Africa but will have an outlet to the sea but again, I have not gotten as far as planning it out yet.

That is the kernel of the plan though but it will be a while before anything tangible happens with it. Or maybe not….

My thanks to Bob for the figures and rest assured they will be used in one way or another!

Interesting plans, be good to see them progress. Must admit the Russian/Polish game looks a cracker, very nice looking board game.

the mention of ESCI Zulu War figures brings back pleasant memories. The Zulu War was my first miniature wargame period. I bought several boxes of ESCI figures at 3 US dollars a box 30 years ago!

I painted 500 Zulu figures to game Rorke's Drift. I adapted some rules that were published in Wargames Illustrated magazine. It was fun running it at wargame conventions.

I also ran games using the Sword and Flame rules.

Good luck with your projects.

The production value of the game is excellent and the rule are pretty straightforward although not particularly well laid out in my opinion. Academy Games seem to cram a lot onto the pages so they can look a little fussy.

I am looking forward to giving it a try though and needless to say have a few ideas in mind….

That is a lot of Zulus! TSATF are a great set of rules with all manner of supplements around. My choice at present would for The Men Who Would Be Kings or any of the Portale Wargame series but in either event it is a way off yet.

Will your colonial adventures include a gunboat?…. For diplomatic issues.

Absolutely! It was that reason reason the Central African Empire has an outlet to the sea! It is a long way off yet though as I have a whole pile of Samurai stuff to ge through first.