It’s All in Black and White…. 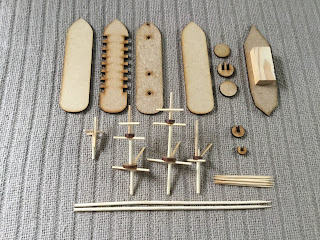 Definitely a ‘before’ shot! I wonder what the idea behind this picture might be?
I was able to spend yesterday evening in the man cave, paintbrush in hand, and it was quite a productive experience. I was able to undercoat the three remaining casemate ironclads as well as the accompanying funnels and pilot houses. I was also able to paint the ‘herringbone hull template’ for the last frigate and as a result the hull for this is now assembled. The two sloops were masking taped and the white lining added. Finally, I was able to paint the funnels for the casemates although I will need to add yellow stripes to the City class pair. None of this was particularly taxing but it took rather longer than I thought it would. Having said that it was a good way to unwind after the rigours of the working day.
I am trying to make a habit of spending some time in the evening in the man cave as it is a great way to ‘take the edge off’ as work has been extremely busy over the last couple of weeks. Oe of the things I have noticed whilst working from home is that there is no filter between being mad busy and then being, well, at home. Previously I would have had the train journey to wind down on - usually with a book or catching up on some TV via my iPad - so a quick trip into the loft serves much the same function.
The plan for today then, is to paint the pilot houses which will mean that the two city class ironclads that are currently missing them will be finished and can be put away. I will then be painting all the deck hatches etc across seven ships (the four casemates and the three fully masted types) before tackling the decks themselves. If time permits I will also seal the forest of masts I have for the frigates and pair of sloops.
The title of this post came about as despite spending some three hours in the man cave, the only two colours I used were, you guessed it, black and white!
Posted by David Crook at 08:29