Pictures, Painting and an Idea 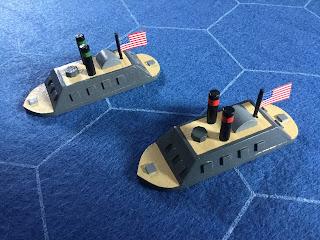 A brace of City class ironclad gunboats - in this case the U.S.S. Carondelet (with the red funnel stripe) and the U.S.S. Louisville (sporting green funnel stripes). Note the octagonal pilot house - not angled as per the historical original but a closer representation than the square block I used previously!

I was able to spend some time in the man cave this afternoon tackling a couple of bits and pieces in relation to the forthcoming Portable Ironclads Wargame book. I needed to get a couple of pictures organised to support one particular chapter and also for the front cover. This was great fun to do and the results are currently with Bob for his perusal. I also managed to get some work in on the seven ships currently being painted. The four ironclads have their decks painted so the armoured bits and pieces are next. As part of this I was also able to refurbish the pair of City class gunboats I had built some time ago. They now have an octagonal pilot house although it is not sloped as per the original. It does look a lot better though. There is one more currently being painted so there will be three of these ‘Pook’s Turtles’ in the collection. The three ships with a full sailing rig will be next, shortly followed by more gunboats for either side.

I have also nailed down some more details for the battle report that will feature in the book and am looking forward to fighting it and writing about the resultant mayhem.

Now about the idea….