Planning for the Final Chapter(s) 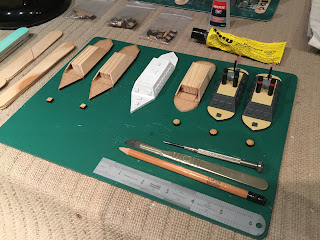 The Rayleigh shipyard in action. Sort of. I shall close of the casemates tomorrow and then it is adding gunports and hatches. Funnels, pilot houses and flagstaffs are painted off the model and added later.

It has been an insanely busy week with work and the usual domestic round. I say usual domestic round because it is now usual following Laurel’s surgery. Whilst the children do what they can when they can due to work that is largely confined to the weekends. So it falls on my shoulders to tackle the usual weekly routine stuff that previously would have been Laurel’s domain. I am not doing everything but still a fair amount, simply due to what Laurel is unable to do being still largely wheelchair and walking frame bound. For her, standing for any length of time is a challenge and quite unsettling as her left leg still tends to have a mind of its own and decides to give up the ghost at odd moments. Needless to say I tend to fret about her like some kind of mother hen whilst she is perambulating - usually without any need but one never knows! We have a catch up with the neurosurgeon at the end of the month so can see where she is against the plan so to speak.

Anyhow, all this has wreaked havoc with my time, especially as work has been flat out.

I am no nearer finishing the models than the last time I wrote although I was able to undercoat the C.S.S. Mississippi - that is as far as I have got! Actually that is not strictly true as I also managed to get the casemate sides for the two models of the C.S.S. Atlanta and the final City class gunboat cut out and assembled. I also took the opportunity to remove the box-like pilot houses for the two City class I had previously built. The reason for this is quite simple - I now have the correct octagonally shaped versions although without the angled sides. When the one I am building is finished I will have three of them, so along with the U.S.S. Essex and the U.S.S. Benton I have a pretty powerful squadron for use along the rivers.

What I have done though, is to have decided to split the battle report into two chapters. The first will cover the scenario from the perspective of the scenario and the rules whilst the second will cover the battle itself. For the latter the plan is to write it largely as a battle report (complete with the obligatory purple prose!) with only the occasional reference to the rules. I was looking back over some of my blog battle reports and they are quite variable in terms of the amount of rules or of the narrative displayed. Writing the battle as an action rather than an exercise in the use of the rules will make it rather more interesting methinks although I shall reference certain rules where appropriate.

I also need to take a couple of additional pictures to support the existing chapters so will look to get that done tomorrow.