Still Moving Along (and with the Gnawing idea in tow….) 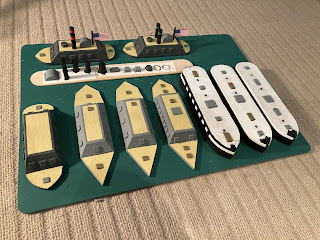 The current state of play. Just a few pieces of tidying up to send to and then the final assembly, varnishing and the all important raising of the respective ensigns are all that remain. Next up will be the three on the right - the masts are assembled and ready to go (and have been for weeks now) and then we are left with eight to go.

‘Twas a dark and stormy night’ - at least that is how it sounded in the man cave this evening as the rain lashed against the windows and the wind picked up. We had the mists earlier in the week and so are currently waiting on the ‘mellow fruitfulness’ to arrive - Autumn is definitely here methinks!

I had a good session with the paintbrushes in the man cave which meant that the armour colour was added to the four ironclads. All that now remains is for some tidying up of the odd area of overpainting and then the final assembly can take place. These four will definitely be ready for action at the weekend. Nearly that is, in the case of the pair of Atlantas. I say nearly because for these two I have yet to work out how best to model the spar torpedo they carried. I will certainly be adding this but my early attempts have so far ended up looking way too ‘heavy’ for the model.  Once I have this worked out it will be simple enough to add them later.

The gnawing idea continues to tease me. It is one of those that absolutely has no logic to it but then again, how many wargames projects have? That was a rhetorical question! Seriously though, It is something that would require a subtle rethink of my building process - you would have probably guessed that it is a naval endeavour - but, and this is the issue I am grappling with, it would open up something else if I pursued it, something that is definitely on the ‘to do’ list.

I am quietly hoping that I can weather the storm of enthusiasm over this idea so that what passes for normality in my world will resume. Time will tell.