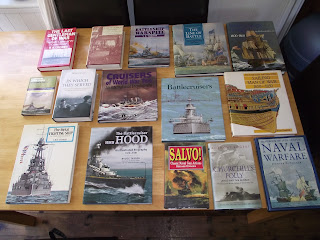 From the top left we have The Last Gentleman of War by R.K.Lochner, The Wooden World by N.A.M Rodger, Battleship Warspite by V.E. Tarrant, The Line of Battle by Brian Lavery (ed), Sailing Ships of War by Dr. Frank Howard. The Middle row from the left consists of German Warships of World War 2 by J.C. Taylor, In Which They Served by Brian Lavery, Cruisers of World War 2 by M.J. Whitley, Battlecruisers by John Roberts and Sailing Man of War 1650 to 1850 by Peter Goodwin. The bottom row from the left consists of The Metal Fighting Ship in the Royal Navy 1860 to 1970 by E.H.H. Archibald, Battlecruiser H.M.S. Hood 1916 to 1941 by Bruce Taylor, Salvo! Naval Gun Actions by Bernard Edwards, Churchill's Folly by Anthony Rogers and The Handbook of 19th Century Naval Warfare by Spencer Tucker. Not a bad haul for £25!

Well I certainly did not see this one coming and no mistake! SWMBO and I decided to visit the small boot sale a short distance from our house before we went and restocked the food cupboards after our recent holiday. It was only intended to be a flying visit and as the boot sale is quite small anyway we did not think this would be a problem.

We had more or less finished looking around when I came across a chap disposing of a great pile of assorted naval titles at knock down prices and so I waded in. The fruits of this spending frenzy can be seen above and whilst I only intend keeping seven of the fifteen titles acquired I am supremely confident that those I am offloading will more than cover the £25 they cost me!

Also, I managed to make some modest acquisitions towards the project of a fellow gamer - he will know of what I am referring to and an email will follow with fuller details in due course....

I love being enigmatic and mysterious!
Posted by David Crook at 16:37

I was very pleased indeed - especially as a couple of the titles I have been after for a while.

A good haul. The Joy of Boot Fairs is that you never know what might be there.

A very good selection, I recognize a few titles from my own. Congratulations.

I am most impressed by the quality of your local car boot sales!

It does'nt happen very often like this but when it does....

I am very pleased for a number of reasons - mainly because a number of the titles had been on my to get list for some time.

The bookcase looks a lot fuller now that's for sure!

The chap selling also told me that a dealer had hoovered up the best titles earlier on!

I was very pleased with the haul for sure although I shall only be keeping half of them.

The Brian Lavery book In Which They Served is really good and I am sure you would enjoy it.

I was very pleased with the whole lot and the bookcase looks far fuller than previously!