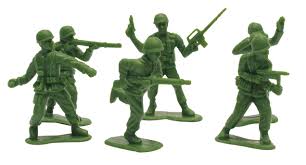 A small selection of the figures from the set (and this is a picture from Google images) - in addition there is a kneeling bazooka firer, a 'Rambo-esque' machine gunner and an NCO armed with a Sten - a copy of the Airfix 54mm WW2 paratrooper

Originally I was not going to write this post until after a couple of conditions had been met. The conditions (actually only one I can think of) were that the figures for this latest piece of insanity should be painted. However, as the idea that has resulted from this has really got my creative juices flowing I thought that perhaps getting this out in the open would be a good thing.

During our visit to Basildon yesterday SWMBO and I happened to swing past Wilkinsons - the general store. I always make a point of checking out the 'toy section' in this particular store simply because you never know what might turn up that could be useful. As an aside I also make sure that whenever we visit Pound Shops or similar I also have a good look around for the same reason.

Whilst on this search I happened to find something that is certainly of profound value to me and, I suspect, many other gamers predisposed to battles involving larger scale figures.

In the early days of the Airfix 1/32nd plastic figures a very good gaming friend and i used to fight battles using these figures in the garden. We also used to be able to buy individual figures as the toy shop we used  routinely opened boxes to sell the figures as needed. I had a Russian army and my friend had the jackbooted Germans. We excavated real trenches and used the overgrown lawn for jungle actions (very useful on the Eastern front....). The figures initially were unpainted but we did slap some paint on some of the for the later battles. We actually used Charles Grant's Battle for the rules but with the ranges and move distances doubled. The games were enormous fun  but we never got around to taking it indoors.

Wilkinson's are selling bags of 50 'Army Men' scaled at around 42 to 45 mm tall and cast in typical tan and green plastic (I should mention that the plastic is hard - not the usual soft polythene) for 25p. That means for £1 you can get 200 figures. That's right - 200 FIGURES!!!!

OK, Foundry they ain't but for that money and quantity I am really not bothered! The figures can best be described as generic 20th century types but significantly there are two bolt action rifle figures and a 'normal' smg type. They are also harder than the usual plastic used and, at the size mentioned, can readily make use of the 42mm range of equipment available from Irregular Miniatures.

What are the implications of this then? Well for one thing, the prospect of some generic 20th century armies looms large - especially of an 'imagi-nation' variety. My immediate thought was for those two old adversaries - Fezia and Rusland. Suddenly the Middle East project has taken on a whole new shape - rather the Caucasus end has.

Vehicles to go with these figures could be a challenge simply due to the scale. Irregular have a small number available but being in metal would work out rather expensive when needed in quantity. My feeling would be use something akin to the concept of the cartoon warship - vehicles with a modest table footprint but with an exaggerated vertical profile. Generic vehicles would be the order of the day - I am thinking of what I call the Hollywood effect - you know the sort of thing, M48s disguised as Panzers - so I am expecting that some carefully modified and painted 'toys' might be the answer or even some basic scratch builds.

As far as rules are concerned I am spoiled for choice and at this stage am not really them much in the way of serious thought - the only thing that should be taken as read is that hexes will feature in one shape or form.

For the record, I went back to the ship and purchased another 12 packets and so now have a plastic mountain of some 800 figures requiring attention. For £4 that must rate as one of the bargains of the century!

David all I can say is:

Its a jungle out there

and as an example of toy vehicles to be found if patient
(in addition to WWII ones easily bought from various suppliers)
checkpoint Frankie
oh and have fun!

I've been pursuing army men gaming for quite awhile now, and have identified some useful tidbits. "Scale" is not exactly a top priority for the manufacturers, of course, so often it becomes a matter of eyeballing the actual models to see what works.

As it happens, the M48 that seems to have been included in just about every "army set" sold over the past 50 years is scaled to 40-42mm, so it would be perfect for your forces.

The gun that is also commonly found is too small to use as artillery per se, but is useful as an anti-tank gun.

Trucks and jeeps run the gamut from approx. 20mm to approx. 54mm in size. Happily, the medium-sized vehicles are the easiest to get, and would look good with your armies.

Many thanks for the two links - the first for the sheer nostalgia value (it took me back a good few years I can tell you!) and the second for the really good table top imagery. Great reports for both as well.

I think the important thing for me with this project is that because the figures are so generic I am completely free in terms of the 'kit' I use. For sure the paint jobs will be modelled on historical types but that will be as far as it goes.

That is a good call and if using M48s for anybody in the right paint job is the way forward then I have no problem with that! These type of playsets often appear at boot sales for pennies so they will feature on my search list next time I go to one.

Good news re the 1/2400th and I will look forward to hearing from you.

What a wonderful find ... and with so much potential!

Some of our local toy shops sell friction-powered Pzkpfw IVs and M1 Abrams tanks which might be useful.

Good luck with this new project.

It might be useful for you to consider Chain of Command which are platoon sized with support and are also an absolute hoot to play as well as being fairly realistic.

Making them fit 'imaginary' forces would be a doddle.

We used to have garden battles back in the late 60's! Great fun!!

I tried my local branch of Wilkinsons ... and the only soldiers that they had were in plastic jars with 75 green and 75 tan figures in each ... at £4.00 per jar. I suspect that you might have been very lucky. I shall, however, keep looking!

I remember playing with the plastic figures in a friends back yard. We tried all sorts of different mechanisms to resolve combat. Fireworks, bb guns, sling shots and several others that got us into great trouble. Those were fun memories. I think the worst casualties were inflicted when we did not clean up properly and they were run over by a lawn mower.

Hi Bob (and in answer to both comments),

The figures I saw were not in the toy section. They were living in a discount section - rather like the one they have in ASDA.

I have sorted the figures into green and tan piles and the next step will be to sort the poses. This will give me a clearer idea around the immediately usable types.

There is an enormous amount of potential with these figures and many thanks for the heads up re the tanks.

I will keep a weather eye open for them - my plans at the moment though are being drawn to Battle! Practical Wargaming by Charles Grant - only on hexes!

As far as imagi-nations are concerned I reckon that Fezia, Rusland and possibly Teutonia will get a look in!

I am convinced that some of the figures are probably still buried in the garden from way back then!

I think the only casualties we had were from burying figures in the foliage!

I bought a copy of Battle! many, many years ago. It was a great read. The rules omitted light machine guns, but that is easily remedied.

A guy nicknamed "Thor" has done a ton of work based on Battle!, even coming up with variants for different periods. His web page is:
[ http://www.thortrains.net/armymen/ ] He also maintains a Yahoo group.

For some reason your email address has dropped off my contact list. Could you please send it to me at [ bumbydad@gmail.com ]?

Many thanks for the heads up re Thor - what a great looking website!

Whilst I do not own a copy of Battle (soon to be rectified with the updated version available from Caliver Books)I have a lot of material relating to the rules - including some for LMGs. I think that using the mechanics on hexes will be no problem although using something akin to Memoir 44 is also appealing.

I have emailed you off blog.