The Strategy of the Indirect Approach 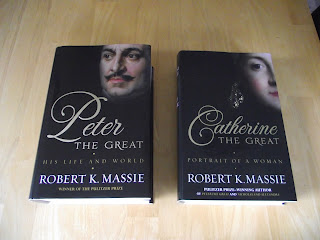 Mercifully we were spared much of the damage from the surface water flood in Rayleigh - in fact it was only the garage floor that got wet. At one point there was an inch or so but that has now gone and indeed, aside from the roads being covered in mud and debris, all looks normal. There were no boot sales to speak of today but SWMBO and I ventured out to Basildon for a couple of hours for some odds and ends.

I was delighted to pick up the two volumes from the Works you see above in hardback for £4.50 each for reasons that may seem a little obscure - even by my standards. The 18th century is an era that I have often flirted with over the years but have never progressed to preparing armies for. This is not likely to change in the short term either but my knowledge of the period has always been rather European or American facing. I have read about Clive's wars in India  but the biggest gap in my 18th century military overview was in what Russia was up to. More specifically what Russia was up to in respect of the Ottoman Empire.

The Russians and the Turks have fought each other numerous times since the 16th century and so there is a rich seam to mine for ideas for conflicts - both imaginary and historical - at just about any point in 300 odd years. Seeing this from the Russian perspective from these two door stopping volumes (and not forgetting that the Northern War and also the Seven Years War will feature) will help me to frame my thought processes around gaming something of the wars these two old enemies routinely fought.

And I'd love to hear it, as one of my many plans is 18th century imagi-nations.

This is very early on in the planning stage but what I have done is to look at the potential of a particular range of figures. Thus far I am liking what I am seeing so the overall concept is feasible.

More to follow but the lord alone knows when!