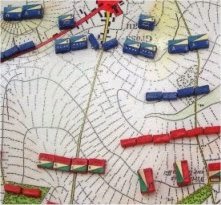 I had planned to have started labelling the new 360 blocks for the collection but hit a minor snag when I discovered that I only had around a third of the number I needed in an unlabeled condition. A further third needed stripping (removing the old labels) leaving a shortfall of around 120 or so. After some juggling of the existing collection I was able to sacrifice around 20 blocks per colour (I reduced some troop types as experience has shown I had rather more of certain units than I needed). After having made up the number of blocks I needed I then set about reorganising the storage boxes to accommodate the additional types.

It is now impossible to keep all of the blocks of a single colour in a single storage box so I will need to acquire another six boxes for the overflow. The additional box will contain the modern unit types - tanks, trucks and infantry support weapons - and, when I finally get around to it, certain pre-gunpowder types.

As as the 360 blocks are concerned the main task was to strip some 240 of the existing labels prior to adding the new ones. This is very simple but both time consuming and tedious. Using the edge of your thumbnail you need to 'tease' the label off in the attempt to remove it in one piece. If you fail (and these labels are surprisingly resilient to being removed) you can end up with the backing adhesive or layers of paper needing minor attention with a file to remove. I suppose in a way this is the block equivalent or rebasing figures....;-)

Still, it is finally completed so the next step will be to cut out and label the new addition and so I hope to be doing this over the next few days.
Posted by David Crook at 06:21

Interesting to hear of your project and see someone else is blogging at this time of day...

I hope to get this latest batch of blocks ready over the weekend. I am also messing around with an 18th century/Napoleonic version of Bob Cordery's Itchy and Scratchy rules which should also be ready to test fairly soon. No prizes for guessing what my next game will be then...:-)

I always check the blog-o-sphere this time in the morning during the week and sometimes even ping in the odd post. I like the peace and quiet!