The following action was fought very much on the spur of the moment and was very much by way of an experiment. I wanted to try the scenario generation system from Neil Thomas's Wargaming 19th Century Europe 1815 - 1878 with my block armies and the latest version of Bob Cordery's 'Itchy and Scratchy' rules. I want to try the rules from the book in due course - once I have 'hexed' them - as they have a number of effective looking ideas contained therein. For the moment though, I will make use of Bob's rules.

The terrain was based on that used for the mini game (usually fought on a 2ft square area) variant and the units for each side, and the starting edges of the playing area, were determined randomly based on the tables provided. The two combatants - Russia and Turkey - rolled 5 and 6 respectively meaning that the Russians fielded 3 infantry units and 2 batteries of artillery whilst the Turks has 4 infantry units and a single artillery battery. All the infantry units consisted of 4 blocks whilst the artillery had 2. The C in C for each side consisted of a single block. This meant that the Russians had 17 strength points (exhaustion level 8) and the Turks had 19 (exhaustion level 9). 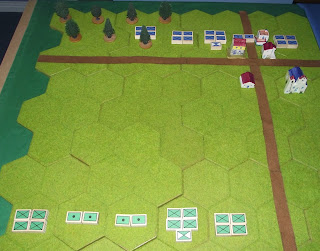 The action was fought using the Hexon tiles, configured 9 x 8. The Russians (the green blocks) are attacking from the East. The two objectives - the hill occupied by the Russian artillery and the small town - have to both be captured in order to secure a victory. 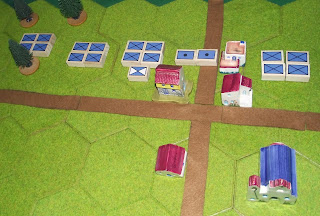 The Turks opted to move their artillery through the town with the bulk of the infantry facing the enemy occupied hill.

The Russians opted to deploy their artillery on the hill with the infantry in support and facing the town. 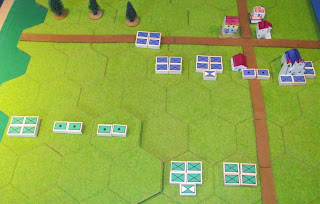 Turn 1 sees both sides moving up into the attack. The Russians push their artillery to the edge of the hill giving it a superb field of fire whilst their infantry deploys to assault the town. The Turks likewise consolidate their hold on the town and ready their infantry to attack the Russians. 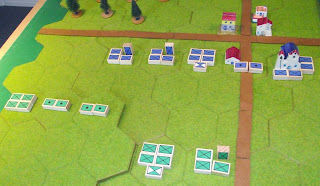 Turn 2. Conscious of their slight inferiority in numbers of infantry the Russians content themselves with using their artillery to telling effect. The Turkish artillery is also quick to register a hit on the nearest enemy infantry. 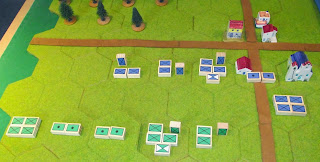 Turn 3. With Russian artillery battering his infantry the Turkish commander moves up a fresh unit from the town and opens up a murderous long range fire. Still the Russian shells rain down. 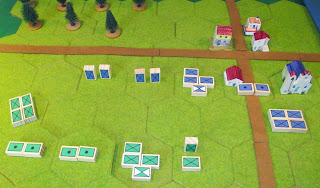 Turn 4. The Russian artillery continues to batter the opposing Turkish infantry into submission, helped by some flanking rifle fire. Meanwhile, to relieve the pressure on the opposite flank the Turks steadily reduce the Russian infantry with a withering long range fire. 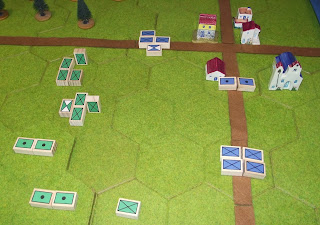 Turn 5. Seizing their chance the Russians quickly redeploy their artillery whilst the infantry swing around to assault the town. Despite the Russian casualties it is the Turks that are on the brink of reaching their exhaustion level first. 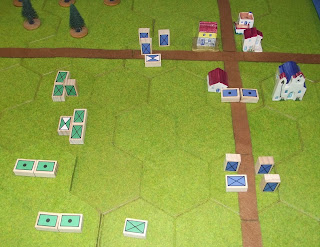 Turn 6. The momentary respite from the redeploying Russian artillery gave false hope to the Turks as it was soon back in action and to telling effect. Sensing victory, the Russian commander urged his infantry forward to capture the town. 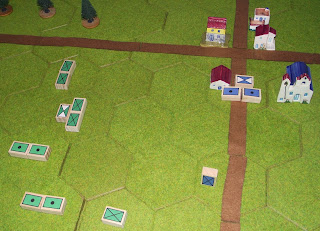 Turn 7. The remains of the Turkish force fall back on their artillery in the town whilst the Russians make ready for their assault. 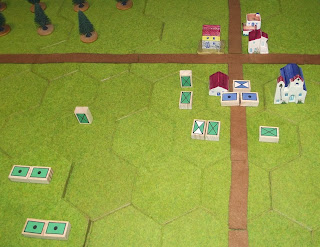 Turn 8 (and I am sorry to say the last of pictures). The Russians attempt to batter their way into the town but have not reckoned on the tenacity of the Turkish artillery and their resolute commander.

Turns 9 and 10 saw successive waves of Russian attempts to storm the town being fought off by the Turkish artillery. The Turks lost a point of artillery but the Russian lost all 4 of the infantry points remaining and also the C in C. As neither side was able to secure the two objectives the result was inconclusive.

Under the strength point system the game should have ended in turn 6 with the Turks being forced to go on the defensive. I opted to observe the scenario instructions whereby to win a side needed to secure both objectives - the hill and the town. As it turned out the Turks fell back and denied the Russians the town so overall the result was the same.

Although this was a small action it was not without a certain amount of interest - not least of which demonstrating the danger of remaining stationary whilst under artillery fire. It also revealed how dangerous a close combat could be when the opposition 'battles back'. The Russians were very unlucky against the Turkish artillery in the town and it showed just how important the use of cover is when outnumbered.

I shall experiment further with the ideas of Neil Thomas as they offer some interesting ideas for the gamer - especially when fighting solo.

It was a pleasant way to spend a rainy Saturday afternoon when all is said and done.

Looks like you are having great fun with the blocks Dave

I am needing a bit of inspiration in that department ;)

The blocks are really handy for getting a game together quickly.

Funny you should mention WW1 Naval....