The following action will probably look rather familiar to most readers as it is, in effect, a slightly larger version of the previous effort (game number 43) which in turn was loosely inspired by the game that Bob Cordery and I had a while ago, shortly after the man cave was commissioned. I offer no apologies for this - my interest in the Russo Turkish War is well known and I was unable to resist the urge to revisit it!

Somewhere else in the Balkans, 1877....The Situation

A divisional sized force of Russians under the command of General Chestikov has been tasked with securing a small village located at the crossroads of a vital communications route for the Turks. The Turks meanwhile had anticipated the Russian move and so had hastily dispatched a reinforced regimental sized formation  with instructions to hold the vital village at all costs. By means of a forced march the Turks, under the command of Pasha Nkeyk, had reached the village before the arrival of the Russians and so had managed to not only secure it but to also bolster the defences with some field works.

The Russians had arrived at their starting positions in the early hours of the morning and so decided to invest the village shortly after first light. As far as they were aware the defenders would be few in number and so unlikely to offer a prolonged resistance. With this in mind the General Chestikov decided to take the village from three sides, using the terrain on either flank to mask his intentions. If successful, this three-pronged attack would ensue that any defenders would be unable to escape except back towards their own lines. From the Russian perspective the forthcoming action should be relatively straightforward but the commander had a healthy respect for the Turks - especially when fighting from cover.

The Turks needed to hold the village for twelve hours by which time the main body of the army would have redeployed into its new positions meaning that reinforcements would be readily available. Pasha Nkeyk was under no illusions that this would happen early on and so, grim-faced, he readied his men and awaited the coming storm.

I used Bob Cordery's Itchy and Scratchy Rules to fight the action and there were to be 12 game turns. Any hex with a building on was classed as a BUA and the two Turkish artillery redoubts counted as cover only against fire coming in through one of the 'walled' hex sides. The Turks did not have enough time to construct anything more substantial prior to the Russian attack. 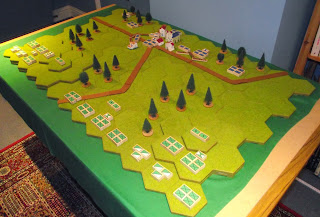 As the sun rose the Russians realised that  the Turks held the village in greater strength than first thought. Even so, Chestikov was confident that he could prevail, especially as either flank offered an opportunity to get close to the Turkish position using the terrain to cover their approach. 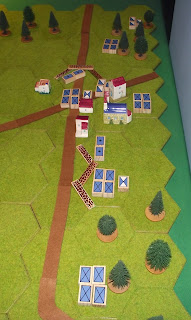 The Turks deployed in cover - either in the village, within the field works or the woods on either flank. Pasha Nkeyk kept half of his cavalry and a single infantry unit in reserve. 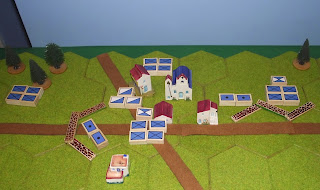 The heart of the Turkish position showing the cavalry and infantry held in reserve. Pasha Nkeyk set up his command post in the centre of the village. 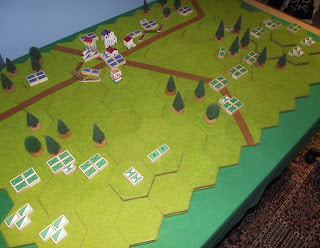 The start of the action shows the Russian advancing on a broad front but with the flanks managing to forge ahead of the troops in the centre. By a command oversight the artillery initially deployed outside of effective range so hastily limbered up and followed the infantry and cavalry they were due to support. Meanwhile, the Turks were content to be spectators although their commander knew this would not last for long. 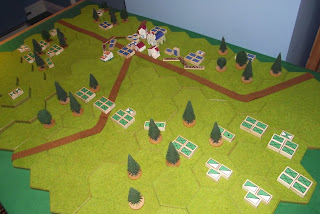 With remorseless intent the Russians continue their advance. The flanking formations, using the terrain to the utmost, are almost in contact but the centre has only just assumed its attack formation. The redeployed Russian artillery has at last come into action and manages to draw first blood by destroying half of the Turkish artillery in the right hand redoubt. 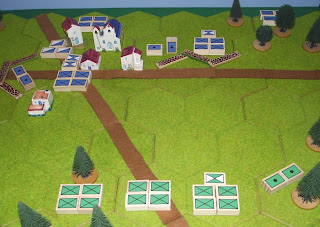 In the centre the Russian infantry are at last ready to commence their attack, supported by their artillery. 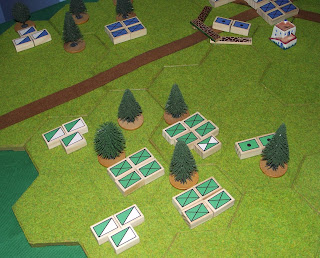 On the Russian left the attack develops though the woods with the cavalry and artillery in support.  Meanwhile, with grim resolve, the Turks ready themselves for the impending attack. 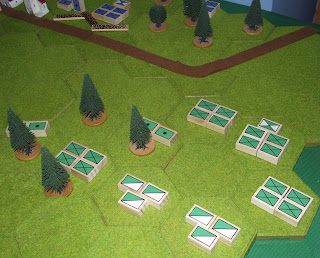 Meanwhile on the right flank, with the infantry in the van, the Russian attack approaches the Turkish position. Upon sighting the mass of green coated infantry bearing down on them the sole Turkish defenders opt to fall back deeper into the woods. 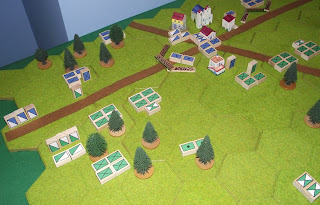 With a bloodcurdling cry the Turkish horsemen crash into the first of the Russian cavalry units. After a brief but vicious struggle the Russians are forced back with losses. Their supporting regiment of horse manages to exact a swift retribution against the victorious Turks though, charging and destroying the disordered remnants. Enthused by the success of their fellow horseman the surviving Russian cavalry, from the unit recently bested by the Turks, attempt to drive the Turks from their position in the woods. Despite managing to inflict some casualties the remaining horseman are shot down. 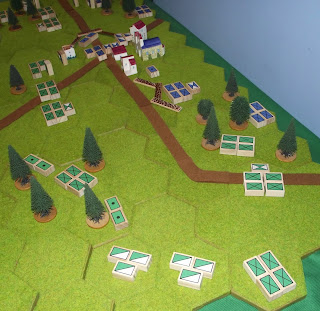 On the right the Russian attack forces its way into the woods whilst the central formation moves up to the Turkish field works. 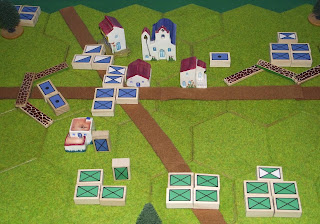 The first attack against the village results in equal numbers of casualties but the Turks, perhaps mindful of the supporting Russian infantry, are forced back. 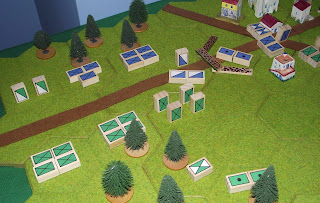 On the left flank though, a coordinated and punishing Turkish attack involving firstly the two infantry units, secondly the artillery and with the coup de grace being delivered by the cavalry; the right flank Russian infantry unit is destroyed under the weight of rifle, shot and cold steel directed at it from all directions! The remains of the Russian cavalry, recently victorious against their Turkish counterparts, then proceed to suffer the same fate as their predecessors at the hands of the same Turkish infantry unit. Thus far the Russian attack is faltering on this flank. 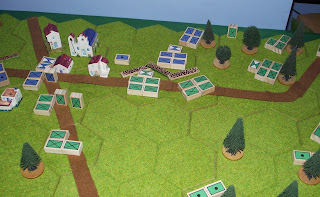 The Russian attack through the woods meets with a setback at the hands of the Turkish riflemen as the tide of green coated infantrymen comprising the centre formation crash into the main redoubts. A desperate struggle at point blank range ensues. 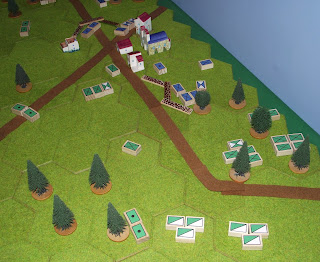 With a herculean effort the Turks beat the Russians in the centre back with devastating losses. The battle swings in the balance though as the Turks in the wood to the rear of the redoubt are finally driven out by the victorious Russians. 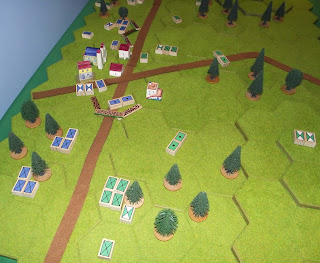 Meanwhile, on the opposite flank, the two sides face off on either side of the dirt track with neither side displaying any degree of eagerness to force a conclusion. 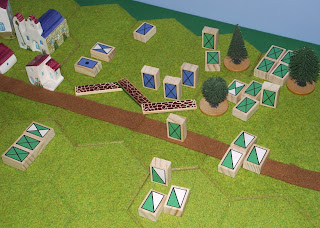 The decisive blow. After having hacked their way through the undergrowth and driven off the Turkish defenders in the wood at last the Russians emerge behind the enemy redoubt. With volleys of rifle fire and slashing of bayonets the green coated horde sweeps into the now unprotected rear of the Turkish position and with a cry of 'Urrah!' the Russian infantry storm the redoubt! The village, so gallantly held and bitterly coveted is on the verge of falling to the Russians.

At this point both sides had exceeded their respective Exhaustion Levels but, as the Russians had managed to break into the Turkish position they were deemed to have carried the day. The final score was Russia: 35 strength points lost and Turkey: 20 strength points lost. 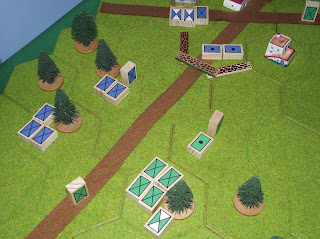 As the Russian right flank victoriously surged into the redoubt and the village the left flank maintained its watching brief against the Turkish units defending the woods to their front. The forlorn attempt to prise them out of their position, not for the fist time that day, failed ignominiously. Meanwhile, unaware of the fate of the rest of the garrison, the Turkish artillery gleefully battered their Russian counterpart with what proved to be the final exchange of a bloody day.

General Chestikov was aghast at the losses his proud division had suffered - his infantry was now little better than a brigade. He had lot half of his cavalry in foolhardy action against infantry in woods and his centre formation was battered unnecessarily by taking what seemed like an age to get into contact. Luckily it did when the right flank attack went in as it gave the Turks much to think about from all directions. It was a much harder fight than he anticipated and in the end it was down to numbers. He made a mental note not to underestimate the tenacity of his opponents when defending a position again.

Pasha Nkeyk knew the day was lost when streams of his panic-stricken infantry ran across the rear of the redoubt with a veritable green tide in hot pursuit. He took the situation in at a glance and made ready to beat a hasty retreat. A runner was sent to the remaining troops in the village and the woods on the opposite flank to the Russian break in and they gradually managed to disengage. The battered survivors, with Pasha Nkeyk at their head fell back from the village with the Russians too exhausted to pursue.

I actually felt quite drained at the end of this fight! It was a very close run thing right until the final game turn (I played 6 out of the 12 planned) despite the disparity in numbers. The Turks fought back hard and actually bettered the Russians on their left and the centre. The battle was won on the Russian right flank and I think that the Turkish decision to send the reserve infantry to the opposite flank early on may have tipped the balance in  Chestikov's favour. The rules demonstrated the increasing power of the defence - especially behind any form of cover - and played magnificently.

The game was tense, exciting and enormous fun to play.
Posted by David Crook at 18:33

The battle report certainly conveys the impression that it was a hard fought, ding-dong battle that could gave gone either way.

It sounds as if the rules are working well, and that they produce reasonably realistic results.

The blocks work very well for this period and give the impression of the formations that the armies would have used.

I look forward to seeing more battle reports before the end of 2013.

It was a very tense affair with the Turks having the upper hand for long periods of time. The action featured much of the flavour of the actual conflict and I must say that the rules really added to this. I have a couple of pints I need to think about further but will email you once I have gotten my head around them.

I hope to get another 7 games in before the end of the year so that I will have completed 52 in two years or one every two weeks on average!

A great BatRep, I enjoyed that. I love the look of the Blocks as well, they look really good.

Many thanks old chap! It was great fun to fun and very tense. I have a number of plans to add some additional unit types that will expand the collection somewhat. I am thinking of things like grenadiers, light infantry and varying cavalry 'weights'.

I should point out that using blocks also saves a HUGE amount of time painting....;-)

Many thanks old chap! The rules worked really well and I am very excited about using them for the earlier musket era. I have a number of 18th century ideas to mess around with and I reckon the system would translate across very easily.