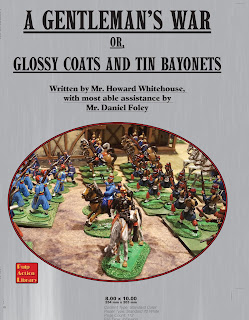 A magnificent addition to the library and needless to say - the catalyst for a number of ideas....

Once again it has been a busy weekend although not with Salute featuring for yours truly. To be honest the gaming budget had been well and truly blown beforehand (see Red Alert and the above, not to mention a couple of books) and so this year going to the UKs premier gaming day was never likely to happen. I enjoyed last year, mainly because of the novelty value, but it was hard on the left ankle, knee, hip and wallet as well as the malodorous effects of the awful lighting. When I left the Excel – around 1pm as I recall– I felt worn out and ached in places I had forgotten I had (not to mention gaining a screaming headache) but, it must be said, with my gaming mojo for the most part satiated. There have been numerous blog posts from those that attended that have mentioned the same to a lesser or greater degree - perhaps our collective advancing years and the occasionally expanding waistbands are a little less forgiving than our previously more youthful selves! For the most part Salute is a little on the large side for me - I prefer a rather more leisurely pace for my browsing these days - so I will stick to the smaller events I attend although as previously mentioned, I suspect I will brave the Excel again at some point.

There was a lot of sorting out over the weekend and much progress has been made with Eric’s collection. The Foundry Marlburian Infantry has more or less gone so the next step is to tackle the cavalry – most of which is Front Rank – and the other infantry and artillery (actually gunners – there are no guns to speak of). I have taken out the Minifigs and Hinton Hunt/Higgins figures so what is left seems to be mainly Essex and Dixons. I have seen some Hinchliffe figures in the mix and also some that are unidentifiable so this will be an interesting exercise for sure.

The big news for me this week was the arrival of the set of rules you see above. I will do no more than quote the blurb from the Amazon advert:

'A Gentleman's War' is a simple game involving toy soldiers of the classic style. It is a relaxedand relaxing game, where enough depends on the turn of a card and the roll of a handful ofdice to say that our disasters are pure chance, but enough cunning decision-making to claimour victories as acts of brilliant generalship.
Our model soldiers are very brave, obedient, and generally do what we want them to. Playersare expected to behave in a friendly manner, and conduct themselves as gentlemen (or ladies, as is appropriate). There are lots of six-sided dice, saving rolls, proper distances in inches, and a general sense that there ought to be salmon-and-cucumber sandwiches and tea, or beer.'

I think I may have found my non grid based companion to the Portable Wargame.

Mention of The Portable Wargame reminded me of two very good blog posts Bob had written about 'A Gentleman's war' which can be seen here:

This is going to be hugely entertaining.

I'm looking forward to receiving my copy. Thanks for further whetting my appetite, David.

With your extensive collection of flats trying these rules out will be easy and trust me, you will really enjoy them!

I will qualify that by saying that I have not used them (yet) but a very good gaming friend has and rates them very highly - and this is someone I have a huge amount of respect for!

Thanks, David. And given Howard's appealingly droll style, I anticipate a lot of laughs will come with along the rules.

I certainly have and just seeing all the Salute posts has worn me out!

I am sorting out the cavalry list this weekend and will email you later.

I hope your knee has not suffered too much although a few beers after the show would have helped!