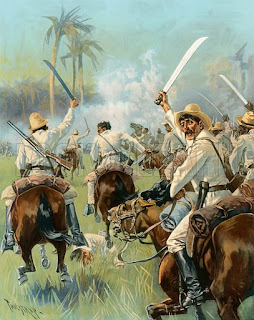 Cuban Cavalry (more accurately mounted infantry) charging with their fearsome Machetes. The Machete has almost iconic status in Cuban history but the reality is that whilst they were widely used and were very useful for hacking through rough terrain (and indeed are still in use on the farms we saw) their combat value was small although psychologically they would put the fear of God into raw Spanish infantry!

Before our recent trip to Cuba and, as is my custom when travelling abroad, I had a quick look at the island from the perspective of potential gaming projects. Naturally my initial thoughts headed towards the Spanish American War but after some casual Google trawling I came up with some other bits and pieces.

In recent years of course Fidel Castro features prominently - the revolution would make for some interesting guerrilla style games or even a Portable Wargame style mini-campaign - but is was the earlier wars starting in 1868 that really caught my eye. The Cuban War of  Independence 1895 to 1898 (remember the Americans only arrived for the final phase of the conflict) also has much potential and featured a number of commanders that served in the previous 1868 Ten Year's War and the following 1879 'Little War'.

I noticed whilst catching up on blog posts that an enterprising gamer has already thought about the Ten Years' War and has raised a Cuban force using converted Perry ACW figures which look quite superb. Glenn's Wargaming Blog also feature a set of rules designed specifically for the period which look very interesting.

The above conflicts feature all the usual elements of Colonial gaming - raids, ambushes, punitive expeditions and so would be ideal for the Portable Wargame or Rebels and Patriots/The Men Who Would Be Kings.

Something to look at in a small way.

I quite fancy going back even earlier to the Haitian Rebellion. Trent minis do a fab range!!!

Was that the one that featured the 'Black Napoleon'? Whenever I think of Haiti images of Voodoo and Live and Let Die come to mind!