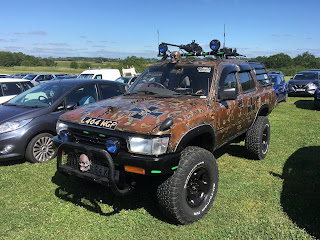 Seen at our local car boot sale and described by the insignia on the side as belonging to the 'Zombie Apocalypse Response Team'. Something for Gaslands methinks!

Just to keep the sequence in order this week features a combined Sitrep covering the weeks I was away. It will not be any larger but it helps to keep things in what passes for a semblance of order!

With what can only be described as a swift move I have settled on my choice for the Cuba project and there are already moves afoot to realise this. I suppose in many ways the impact of my first visit to the Caribbean has played a significant part in the decision but my excuse is that well, its me and that's how I roll!

1:450th scale ships - all of which can mean only one (or in my case, two) thing, namely Peter Pig and the Pieces of Eight system. This has been around for a few years now but has recently been revamped. I have always had a soft spot for pirates and the whole privateering thing along the Spanish Main. The idea of small scale naval games and combined operations is really appealing and the Peter Pig range is perfect for this. My order for the figures is in and I am hoping to get the land part ready by the end of the year. Naturally the Portable Wargame will feature and one of the big attractions for me of this whole genre is the ease with which one can add a really good and inventive back story and create all manner of outlandish personalities because the reality is that is what actually took place! More on this in due course.

The ACW 30mm Spencer Smith project - at least the land element there of - is progressing very nicely indeed although I will need to get busy with basing in due course. I have roughly half of the figures on multiple bases so these will need to be removed and placed on the individual MDF bases I have acquired for the purpose. There is also the naval side to think about.

Whilst the above are simmering nicely there will also be part two of the disposal of Eric's collection. I have a few loose late 17th and 18th century ends to tie up as well as a big eBay listing to tackle but at least I will be able to store the remaining figures in a rather more compact fashion than the original 18 crates worth. Next up will be the 20mm WW2 metal collection and so i will post more details when I have them.

I must admit I do too have a soft spot for pirates and used to have them in 28mm and even played a game once as well!

There is a long story behind this idea dn once it is sorted out all will be revealed. I have seen some really nice 28mm figures for the period but was always taken by the Peter Pig offerings.

That is of course the pirates favourite letter of the alphabet....