A few years I was given a small pile of books by Bob Cordery following one of his reorganisation exercises. I am confident he is not the only gamer that does this and indeed, I seem to be doing so - and 'churning' my collection overall - every few months or so! Anyway, the book you see promptly joined the East African section of my Great War library and quietly waited until I got around to reading it. 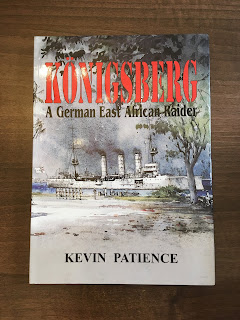 A quite remarkable tome and a wonderful story to boot. Quoting the mantra of COW and Wargame Developments in general "There's a game in that!"

The East African campaign during the Great War is a fascinating story of which the Konigsberg forms a significant part - even after she had been sunk. Her crew and main guns (10 x 4.1") were salvaged and deployed by the Germans both in the field in support of Von Lettow-Vorbeck and as fortress artillery in defence of their colony. Could she have gotten away? I have no doubt she could have gotten to open water but given that she was undermanned, in poor shape mechanically and chronically short of coal as well as being outgunned would probably not have lasted very long.

Her story and ultimate fate are the main contents of this book and the author draws on many accounts from various participants to round out the story. There are numerous contemporary pictures and plenty of technical detail as well accounts of the short but interesting life of the ship up to when she sought sanctuary in the pestilential and crocodile infested Rufiji Delta.

Her final battle in the Rufiji Delta would certainly make for an interesting game in my opinion and so I shall look into this in a little more detail to see how far it will float.

As an aside I should point out that the entire East African campaign was the main inspiration for the famous Madasahatta campaign organised by Eric Knowles.
Posted by David Crook at 09:32

The East African campaign has always piqued my interest, but frankly too many stalled projects in the queue already!

I would be able to tackle the land based elements with the block armies although I have a pile of 1:600th figures from Tumbling Dice that could be pretty useful if required. The naval side is different as there only needs to be a few models.

Something to think about though.

Good points David and worth consideration.

It is one of a number of ideas I am thinking about - in fact it fits in quite well with my plans for a kind of Madasahatta revisited affair.