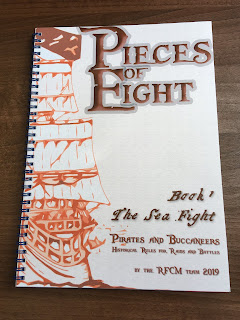 Three sets of rules in one - sea, land and a campaign system all ring bound with high quality colour throughout, not to mention separate card play sheets. The rules are currently £24 plus postage.

Today I took delivery of the latest version of Pieces of Eight - the naval, land and campaign system from Peter Pig as part of their RFCM (Rules For The Common Man) system and in support of their 15mm figure and 1:450th scale ship ranges. The original version of the rules came out in 2000 and it has been continually updated in the light of additional playing experience ever since. In fact they mention the fact that some of the play testers racked up an impressive one hundred or so games during this latest revision.

At first glance these rules appear to tick a lot of boxes for me for this particular project although sadly the galleys and Xebecs used by the Barbary Corsairs are not included despite their being figures for them. I hope that this omission will be rectified at some point!

Whilst aimed at the world of the Pirates and Privateers and covering the period 1650 to 1730 there is probably no reason why these should not be used for the later post 1750 period as long as one is not overly 'picky' about points of detail.

I have been looking for a good excuse to buy some of the 1:450th warships and reckon these rules have clinched it so I shall sit down at some point and see what I can come up with.
Posted by David Crook at 13:12

Aaaarrrr! You do have your first piece of booty, David me'lad! :)