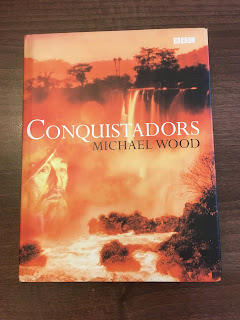 Great book, great TV series but why do I get the feeling that this is not going to end well.....?

My capacity for being sucked into yet another project is legendary. Very occasionally I even manage to make one of them stick in some fashion although usually after the initial rush of enthusiasm has been exhausted, practicality rears its ugly head and this the current 'in thing' inevitably falls by the wayside. There should be a law against wargames fly tipping in this manner methinks!

I mentioned in the last Sitrep about my acquisition of a selection of Foundry Pirates and figures from their El Dorado range. My initial thoughts concerning the latter eventually settled on using them as Portuguese on the basis that the variety of opposition had greater variety than that facing the Spanish version. Conquistadors all for sure but with the Portuguese you could number Africans, Indians, Arabs, East Asians, Chinese and Japanese amongst their opponents rather than the more usual range of Central and South American types (Brazil is a separate issue - at least for my purposes).

This is not a period I know very much about although I was reminded of the excellent BBC TV series some years ago called Conquistadors by the well known historian Michael Wood. Before I had settled on the Portuguese I figured it would be good idea to track down a copy of the book of the series as a good introduction to the whole Conquistador phenomena and its place in the overall scheme of things. I duly picked up a copy for a giveaway price and I am pretty sure you can guess the rest....

The source of the El Dorado figures also has a number of Tlaxcallans and Aztec figures - unpainted - for disposal that initially I was going to leave. However, my ice cream like resolve has melted faster than the England cricket team's first innings against Ireland and so I am looking at the aforementioned Aztecs and Tlaxcallans.


I must be mad and I am hoping that this temporary brain storm will soon pass but just when I am getting a handle on things so the above book beckons me onward with its siren call.

An old wargaming friend, sadly no longer with us, raised an Aztec army using Naismith figures in 25mm (this would have the early to mid 1980s) to use under WRG 6th edition. As I recall it was lethal in action but looked to my eyes as being incredibly difficult to paint well. there was also rather a lot of figures involved!

These days, with the whole Portable Wargame/Rampant series of rules being my gaming of choice raising such forces are, for me in any event, far more achievable in theory.

I am still thinking about the opposition for the Conquistador types but the traditional New World option is very tempting. However, whichever direction I opt to source the opposition from - the West or the East - I need to carry out rather more in the way of research before committing myself!

I used the foundry Elizabethan range to portray conquistadors when I had Aztecs but now use them as Portuguese for my Samurai Range!

I must confess that the Portuguese appeal rather more than the Spanish but the whole Aztec thing has a charm all of its own. I am taken with the idea of Indian opposition but who knows?