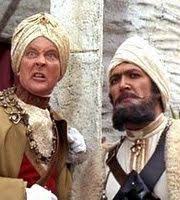 This weekend sees the annual Conference of Wargamers (COW) organised by Wargame Developments taking place at Knuston Hall in Northamptonshire. The society has been around since 1980 and I have been an occasional member over the years - I even penned an article for the society journal, The Nugget a few years ago - but this weekend will be the first time I have ever attended the event. Unfortunately I will miss the Friday evening events as I have a prior engagement elsewhere so it will be an early start on Saturday morning to make the two hour drive in order to arrive in time for breakfast.

I am looking forward to the weekend for a number of reasons. Aside from the opportunity to get some interesting games in it will also give me a chance to meet a number of the 'bloggeratti' as well as few well known names from the world of wargames in general. In truth, and at the risk of sounding like a teenage fanboy, I am really looking forward to the networking aspect of the event and meeting all those people that have influenced my gaming in various ways over the years.

I have so far signed up for a single game and this has been organised by that Colonial stalwart Bob Cordery and for which he has been earnestly preparing over the last couple of weeks/months.

The game is called 'Carry On Up The Nile' and is a kind of sequel to his game of the previous year called 'Save Gordon'. I have volunteered to play the role of the Randy Lal, the Kharsi of Kalabar, following his exile with a Burpa bodyguard after the earlier events in the Khyber Pass as depicted in 'Carry on up the Khyber'.

This promises to be a lot a fun and I am really looking forward to taking part in it.

Carry on up the Khyber was one of the best of the series, alongside Carry on Cleo, and it never ceases to raise a laugh.

In order to get into character for the game I will naturally have to watch the film again. And again.

Don't forget 'Carry on Screaming'! Really looking forward to pics of the game and hope you all have a great weekend.

I have to disagree. It wasn't one of the best of the series. It was THE best ;-) 'That'll teach them to ban turbans on the buses.'

Ah David, they won't make films like those again. My favourites were Carry on Dick and Carry on Cowboy (Kenneth Williams as Judge Burke, Mayor of Stodge City), but they were all so funny! Have a good weekend and don't give up on the blocks yet please, we aim to back in the UK around late August now, the blocks will be on the van and you are still welcome to them. It took me a year to get those Travel battle sets to Bob, he got them in the end :)

Ah, the old 'Frying tonight!' special! They don't make them like that anymore!

I am happy to stand corrected and reckon you are probably right!

Good to hear from you old chap and I hope all is well! Carry on Cowboy with Sid James as the Rumpo Kid as I recall. The whole series are what I like to describe as seaside postcard humour - and are great fun in a non PC way.

Many thanks re the blocks and as and when you are able to pass them on will be just fine.