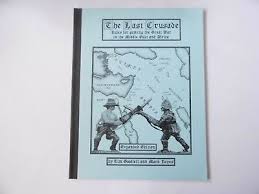 As the dust from COW slowly settles I am now in a position to get back to what passes for normality in my wargaming world. I have a lot of things to do - mainly administrative in nature - and of course there is also the ongoing disposal of Eric's collection to consider but I would say that I feel properly enthused following my weekend away. Being surrounded by like-minded souls, albeit briefly, does wonders for one's spirit and I am now looking forward to the rest of the year with renewed vigour.

One of the things I have been doing is reading through the above set of rules that came from the bring and buy at COW and I have to say that my interest in the theatre in question has been properly reignited! In truth I cannot see myself using the rules as such - although they are not as complex as I first thought - but the information and ideas contained within its pages is invaluable.

Aside from the extensive orders of battle for Palestine, Gallipoli, Caucasus, Mesopotamia, East Africa and Arabia there are also a number of theatre specific scenarios. These are as follows:

All of the above feature maps, orders of battle and scenario specific rules along with the victory conditions. Mulling them over I have come to the decision  that here is my gaming schedule for the rest of the year as it would be great fun to turn them into something Portable Wargame based using the block armies. It would be relatively straightforward to organise each one and as the entire theatre is something I am really interested in I will certainly enjoy the process.

I will be fighting these scenarios in the order above and on a 12 x 8 3" square grid (I have two boards this size - one green and one sand coloured). I will be using Bob Cordery's Portable Wargame for the rules. The block armies will be used and for identification purposes and so I will need to get the command blocks with flags and numbers ready in the first instance. I will use all the scenario specific orders of battle and victory conditions and the maps after having adjusted them to a grid. I have even set up a folder on the blog called "The Last Crusade" to store the after action reports in. I am also go to get all these games in by the end of the year!

The book does sound very interesting and I may have to see if I can find a copy. Naturally looking forward to seeing how this progresses with your blocks.

I sat down and thought about how best to tackle this and was struck by the simple fact that I have most of what I need in respect of terrain and the block armies. I merely need to convert the scenarios into the Portable Wargame format and I am then good to go!

I am looking forward to this as it has been far to long since I had a game in the man cave!